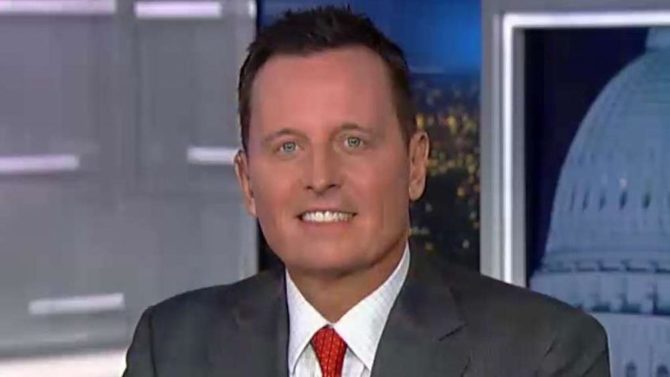 Ambassador Richard Grenell, the openly gay US ambassador to Germany, has slammed Mayor Pete Buttigieg, claiming that he’s perpetrating a “hoax along the lines of Jussie Smollett” when it comes to his beef with Vice President Mike Pence.

Grenell, one of the few queer officials appointed by the Trump White House, attacked Buttigieg, the first openly gay candidate to run for a major party ticket, in an interview with Fox News.

“Mayor Pete has been pushing this hate hoax along the lines of Jussie Smollett for a very long time now, several weeks,” Grenell claimed.

“When Mike Pence was governor, there was total silence [from Buttigieg]. It’s ironic that right about now when he’s starting his fundraising apparatus to run for president that he comes up with this idea and this attack.”

“They don’t have hate in their heart for anyone. They know my partner, they have accepted us. You asked me do we agree philosophically on every single issue? No. When Mayor Pete came out, the vice president complimented him and said he holds him in high regard. The vice president said nothing but positive things about Mayor Pete. I think this is a total hate hoax and I think it’s outrageous.”

Grenell’s claim, however, is demonstrably false. Both Buttigieg and Pence hail from Indiana, where the former served as Mayor of the city of South Bend, and where Pence held the office of Governor.

Buttigieg has criticized Pence numerous times, including in 2015 when he attacked Pence for signing a bill which allowed discrimination against LGBTQ people for religious reasons. Pence also has a long history of anti-queer positions and policies, including support for conversion therapy, cuts to HIV/AIDS charities and the aforementioned “religious freedom” bill. Pete Buttigieg has sharply criticized Pence for his record as part of his Presidential campaign.

In related news, we have to wonder if Richard Grenell has partied with fellow elitist and self-loathing gay Republican stoolpigeon Aaron Schock. Somehow, it wouldn’t surprise us.