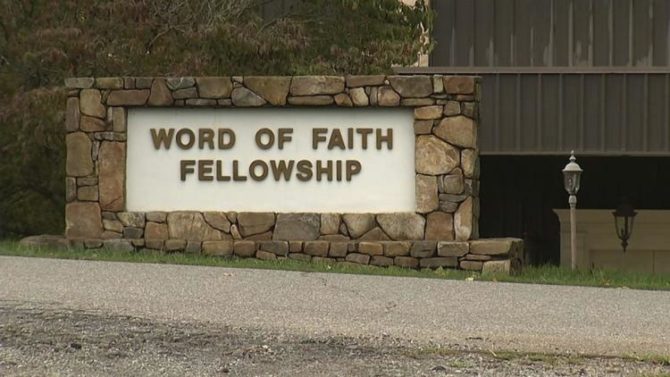 Oh jeez. More drama surrounding the Word of Faith Fellowship, the extremist evangelical church accused of beating a gay man for two hours in an effort to expel his “homosexual demons.”

Just to recap: Matthew Fenner, who is openly gay, recently pressed charges against pastor Brooke Covington for kidnapping and assault. In June, a mistrial was declared due to juror interference.

The church is located in Spindale, N.C., about an hour outside of Charlotte. It also operates two addition churches in Brazil, as well as another one in Ghana. In total, they have over 2,000 worshipers internationally.

Well, the AP just released a bombshell report claiming that, in addition to beating its gay members, the Word of Faith Fellowship also runs an illegal slave operation.

Honestly, horrific as that is, we can’t say we’re terribly surprised.

According to the report, hundreds of immigrants have been lured into joining the cult, er, church over several years. They are brought to America only to be forced to work for no pay and have almost every single aspect of their lives controlled, including having their passports confiscated and being forced into arranged marriages against their wills.

Andre Oliveira is one of those immigrants. He tells the AP that he was brought from Brazil to America by the church when he was a teenager. Upon arriving in North Carolina, he was forced to work 15 hours a day, usually for no pay, cleaning warehouses and doing menial chores for businesses owned by senior ministers.

“They trafficked us up here,” he says. “They knew what they were doing. They needed labor and we were cheap labor — hell, free labor.”

He continued, “They kept us as slaves. We were expendable. We meant nothing to them. Nothing. How can you do that to people — claim you love them and then beat them in the name of God?”

Another person said church leaders regularly verbally and physically assaulted the slaves. Men were generally forced do work in construction, while women worked as babysitters and in the church’s K-12 school. One ex-congregant said she was just 12 years old the first time she was put to work.

Related: Pastor accused of beating gay man for two hours says she’s innocent because he never asked her to stop

Paulo Henrique Barbosa says he got involved with the church when he was 17. Now 23, he claims after being brought to America, church leaders made him do hard manual labor all day and night, sometimes working as late as 1 a.m. He was never paid a penny.

Barbosa also says he asked many different times if he could return to Brazil “but they always told me no, that it was God’s will for me to stay.”

“From the time you are a kid, you are trained to believe that leaving the church will mean you go to hell, get cancer or get AIDS,” he says.

Word of Faith Fellowship has yet to issue a response to this latest report.