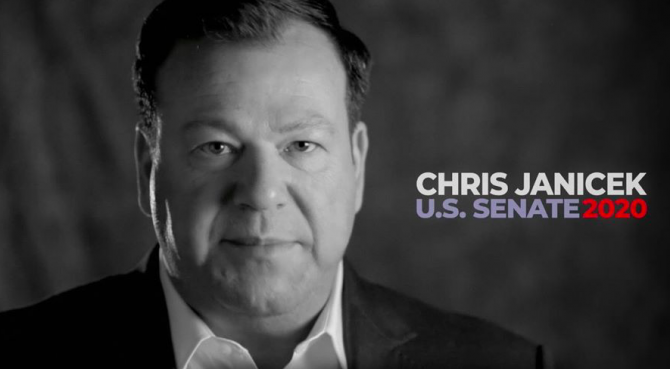 Democrat Chris Janicek is an openly gay Senate candidate from Nebraska. He’s currently facing calls from his own party to drop out of the race after a group text scandal involving himself, a female former staffer, and four other campaign staffers.

In a June 4 text exchange, Janicek, who just won his party’s nomination to run against Republican incumbent Sen. Ben Sasse, sent a group text asking everyone if he should use campaign funds to have a female staffer gang banged.

“Do you think the campaign should spend some I’m getting her laid,” he wrote, adding, “It will probably take three guys.” Then he described in vivid detail exactly what he wanted the men to do to her, saying “one for the mouth the ass in the va-jay-jay.”

Janicek followed that up with another text apologizing… for his typo in the first text, explaining that “spend some I’m” should have read “spend some money on.”

A short while later, he followed that up with another text saying his original text had been “out of line” and blamed it on his lack of sleep and the excitement over winning his primary.

“I’m going on no sleep and a bunch of exuberant excitement and I think I was out of line now that I read my text back I apologize,” he texted, adding that he “valued” the woman and wanted “to issue apologies again for my tasteless statements.”

To which the woman he targeted responded to the group: “As a woman who stands up and beside other women, I can’t just pretend this didn’t happen. I cannot support your campaign after what you said. I have integrity, morals and values but, most of all I have self respect for myself and fellow women.”

Speaking to CNN, Janicek says he didn’t mean anything by the texts and was “simply repeating what she had said earlier in the week, that she needed to get laid.”

“I’m an openly gay man running for senate against Ben Sasse, so it was not sexual harassment, it was something that had been discussed between her and a girlfriend,” Janicek explained, adding that he had overheard the woman talking on the phone at campaign headquarters.

Janicek adds that he now understands what he said was “unacceptable,” “inappropriate,” and “wrong,” and that he has tried to make amends with the staffers involved.

“I immediately apologized,” he says. “I reached out to all people involved in the text, emailed and apologized to them. I apologized verbally to the one person it was about, and sent a personal handwritten letter apologizing and I met with her in person to apologize again and to ensure that she received my letter.”

But that didn’t stop the Nebraska Democratic Party for demanding he withdraw from the race and pulling all party resources from his campaign.

“Our Democratic Party has no tolerance for sexual harassment,” the party said in a statement. “Our Party will not extend resources or any type of support to any candidate that violates our code of conduct and doesn’t treat men and women with the dignity and respect they deserve.”

But Janicek appears to be digging in his heels, saying he “did not consider it ever” when he was asked to drop out and has no plans of withdrawing his name from the ballot, all but ensuring a win for Republicans in the fall.

“I’d like to just move on with the campaign,” he says.

Queerty has reached out to Janicek for comment. We will update this post if we hear back.