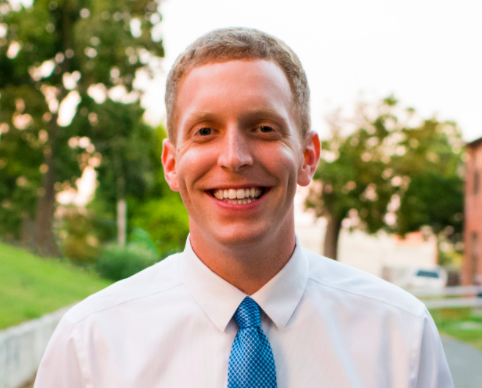 Alex Morse is the openly gay, four-term Democratic mayor of Holyoke, Massachusetts who is currently running for Congress. Last week, he found himself ensnared in a college sex scandal. Now, he says he’s not letting his past sexual exploits ruin his political future.

The 31-year-old just announced that he has absolutely no intention of dropping out of the race after admitting to hitting on and having sex with multiple students at UMass Amherst, where he is a political science lecturer, as well from other schools in the Five College Consortium, while he was on the campaign trail.

Also, he says, anyone who wants him to end his candidacy is being homophobic.

Last Thursday, several students came forward to say Morse had connected with them on Tinder, Grindr, and Instagram, sending them suggestive DMs and, in some cases, propositioning them for sex following campus events.

The College Democrats of Massachusetts accused Morse of using “his position of power for romantic or sexual gain” and making many of the students feel “uncomfortable.”

In a statement issued Friday, Morse admitted to having “consensual adult relationships, including some with college students” and apologized “to anyone I have made feel uncomfortable.”

“I want to be clear that every relationship I’ve had has been consensual,” he said. “However, I also recognize that I have to be cognizant of my position of power.”

After admitting to the behavior, many called on Morse to end his candidacy, which, honestly, is not all that unreasonable. In the post #MeToo era, college professors should absolutely know better than to proposition students for sex.

Well, last night, Morse issued another, more forceful statement, this time insisting he’s not a sexual predator, that he hasn’t done anything wrong, and that he has absolutely no intention of ending his congressional campaign.

I want to be very clear about this. I have never, in my entire life, had a non-consensual sexual encounter with anyone. I have never used my position of power as Mayor and UMass lecturer for romantic or sexual gain, or to take advantage of students. I have never violated UMass policy. Any claim to the contrary is false.

Some might argue that it’s not really up to him to decide if he “took advantage” of his alleged victims. It’s kinda up to them to determine how his actions made them feel.

As I’ve acknowledged, I have had consensual relationships with other men, including students enrolled at local universities that I’ve met using dating apps. While I am confident that a full investigation into these matters will clear my name completely of any unethical conduct, I also recognize that some students felt uncomfortable with interactions they had with me. I am sorry for that.

Morse went on to imply that he believes the story is a politically motivated smear, as it broke just three weeks before his primary.

Then he tried saying an attack on him, as an openly gay man running for higher officer, is an attack on all LGBTQ people.

Um, except that most LGBTQ people don’t sleep with their subordinates.

To the many members of the queer community that have reached out to me in recent days, it’s clear that many of you feel that these recent events, and the language used in response, aren’t just an attack on me, but on all of us. You’re genuinely outraged, as I am, by the invocation of age-old gay stereotypes. You have reminded me that we’ve come too far to turn back. I want my freedom, and I want you to have yours, too.

Morse said he plans to continue his campaign “mindful of the fact that my personal life–and my consensual sexual activity–will be subject to scrutiny and fixation that are all too familiar to other members of the LGBTQ community.”

Then he seemed to draw comparisons between his sleeping with students to things like police raiding gay bars, bathhouses, and public restrooms.

“I say this not to shirk responsibility for having made anyone uncomfortable,” he concluded. “I am simply highlighting the fact that I am being held to a different standard, one deeply connected to a history of surveilling the sex lives of people like me.”

My statement on the last 48 hours. pic.twitter.com/2RU5ht6jZ8

This whole situation is pissing me off because it’s full of a bunch of rose idiots not understanding that the legality and age of the individuals aren’t the issues here. It’s the professors/lecturers-student dynamic. Y’all are just telling on yourselves.

The old trope of Lecturers shouldn’t sleep with students at the school they are lecturing at strikes again hey?

queer people face a lot of unjust structural challenges… having people highlight the problematic power dynamics of your sexual relationships with students is not one of them! homophobia is layered but dragging the rest of us into this was not the move

What you have done is horrific & egregious. You violated the basic charge of academic labor, which is creating a safe workplace & learning environment. You are a blight on the Left and on higher education. And anyone defending you is not a friend to either workers or students.

He’s being attacked for abusing his power & all the white ppl who think this is perfectly acceptable terrify me. I have a daughter who’s college bound soon

You had the opportunity to say, “I have never had a sexual relationship with a current or former student, and never discussed such a possibility with a student,” and instead used a Clintonesque formulation to avoid the real issue.

it’s a shame this is now a referendum on the right of powerful people to sleep with students, because most people, like myself, are strongly against that

Queerty has reached out to Morse for comment. We will update this post if we hear back.