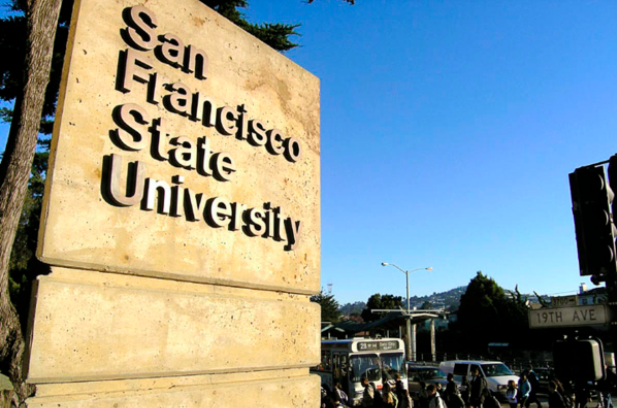 Hmmm. Something appears to be up at San Francisco State University.

Jose Francisco is a student at the university. He’s also a health educator for freshmen students at Gateway High School. And he’s gay.

In a recent op-ed in his school’s newspaper, Jose claims something unusual happened after he told the nurse he was gay when he went into his school’s health clinic for an STD test.

“Recently, I got my routine HIV and STI test at SF State’s clinic,” he writes. “While sitting in the clinic, I was told by the nurse I would not be allowed free access to the same health care services as my heterosexual counterparts would.”

Huh? That seems weird. Especially at a liberal school located within a liberal city inside a liberal state. Jose thought it was weird, too. So he did some research. He learned that the clinic is part of the Family PACT program, a government-funded program that provides free STD testing… to straight men and women only.

According to Family PACT’s website, the organization’s mission is “to make available to citizens of the State who are of childbearing age comprehensive medical knowledge, assistance, and services relating to the planning of families.”

The organization has four requirements students must be met to be eligible for assistance:

In short, Jose explains, because of the family planning component, “this means straight men and women can access these services for free. While I, on the other hand, had to pay $217 (for the exact same services).”

After he left, Jose contacted the clinic about the issue, but he says nobody there would give him a straight answer, so he went directly to Family PACT.

“I explicitly asked, ‘Am I not allowed this service because I am a male who happens to have sex with other males.’  She replied, ‘Accurate,’ and asked if I had any further questions.”

According to the CDC, STDs reached an all time high in 2015, with gay and bisexual men being at an increased risk. Not just that, but young people, ages 15-24, are at the highest risk for contracting chlamydia and gonorrhea.

“SF State must stop this discriminatory practice against the LGBTQ+ community,” Jose concludes in his op-ed. “The University must provide HIV and STI testing services free of all cost, regardless of one’s sexual orientation, since there is already a program allowing this for straight men and women.”

But Gene Chelberg, Associate Vice President for Student Affairs, tells Queerty the school does not discriminate.

“SF State Student Health Services provides basic medical services to all currently enrolled students and does not discriminate based on gender identification or sexual orientation,” Chelberg says in a statement. “The Student Health fee does not cover most laboratory tests, including those for HIV and STIs. Therefore, all students, regardless of their sexual orientation or gender identification, must pay for the costs associated with the testing.”

Chelberg says students who do not meet the requirements for Family PACT but cannot afford testing are referred to either Planned Parenthood or Strut, a San Francisco community-based organization that offers free sexual health and medical services for men who have sex with men.

Related: The most “sexually diseased” states in the United States ranked 1-50 on one handy map