Cameron Hawthorn came out as gay through a music video in March, but his latest vid is even steamier. To the tune of his song “Oh Hot Damn,” the country singer locks eyes with a handsome stranger at a honky-tonk saloon and joins the guy for a flirtatious line dance.

Related: A country star danced on stage at a gay bar and had the best night ever

“To be frank, it’s the first song I wrote about sex,” Hawthorn told HuffPost. “I was thinking about line dancing and how people — when they go to line dance, they own it, you know? They don’t care what anybody thinks. So it’s about being turned on by somebody and finding the freedom to express it.”

He also explained that his personal journey inspired the narrative: “It’s about seeing where I want to be, taking that leap of faith and joining the dance, in a way.” 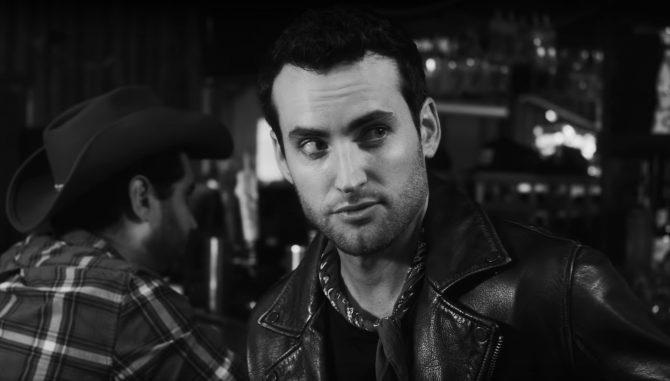 The hot new single builds on the momentum of “Dancing in the Living Room,” the music video that established the Nashville-based musician as an up-and-comer in the LGBT country music scene this spring.

Related: Brandon Stansell on dancing for Taylor Swift in London and the life of a country singer

“I’d been doing music for a while and I wasn’t out,” Hawthorn recalled to HuffPost. “People were saying, ‘Who is Cameron Hawthorn? What do you want to say as an artist?’ And I knew what I wanted to say, but I was scared to say it.”

“I sat on [the video] for so long, and I thought a lot about whether I wanted [my sexuality] to be a part of my story. But I’m inspired by other artists who are true to who they are, so I saw it as my chance to go out there on a limb and just do it with no regrets.”

I don’t even know if I can stand it, I’m like wooooo oh hot dammit.