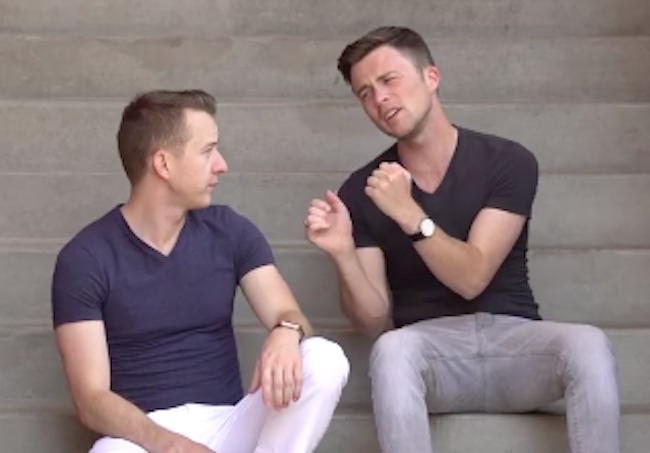 And suddenly, dying alone doesn’t sound half-bad. At all.

Because every moment in life deserves to go viral — from that last tremulous spoonful of cottage cheese to the lancing of a pernicious perirectal abscess — a gay couple has announced their breakup via rap video. The end result will bend your soul into the shape of a middle finger.

Related: Breaking Up Is Hard To Do, Just Ask One Of These Guys

Unlike rational people in breakups, who simply scissor up one another’s clothes, max out credit cards, and drag names through the dirt until careers are destroyed, Blake and Jeremy –who want to be called “Blaremy,” in the hopes of inducing vomiting — have written, recorded, and shot a video to a rap song that tells you, the cowering viewer, why they decided to end things.

The “song” tells the story of their seven years together. They met in an Arizona fraternity. They bought their first house when they were just 19. They worked together in real estate. But now they’re drifting apart — thank baby Jesus — because they have different priorities in life.

Set to the tune of Biz Markie’s deliberately aggravating “Just A Friend” from 1989, the song’s lyrical vision includes such couplets as “You wanna travel the world and have brunch in Brussels / I wanna settle down and put together some puzzles.”

Related: Breaking Up Is Hard To Do, Just Ask One Of These Guys

Apparently, they’re going to remain good friends — even after their vexing relationship and their sole rap collaboration. Blake even says he’d give Jeremy “five stars if you were my UBER driver,” probably because he wants you to have a nervous breakdown.

If you need anything this afternoon, we’ll be relaxing in our luxurious Silkwood shower.