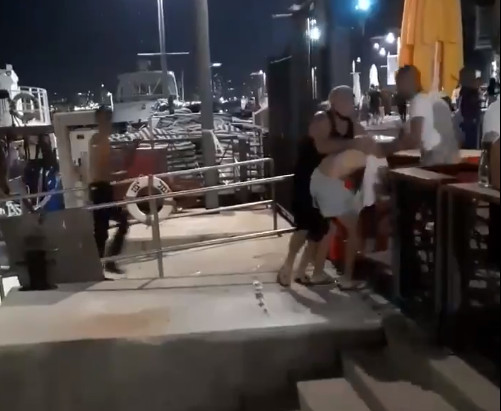 Video of a horrific attack on a gay couple in Israel has gone viral. The footage shows a group of men beating a gay man as hundreds of bystanders watched…and did nothing.

The Jerusalem Post reports that the attack occurred on Saturday night (August 1) in Jaffa Port. A gay couple had gone sailing together, renting a boat from the harbor. When they returned, a group of about 20 men saw the couple–who are Arabs–and began spitting on them. The attack escalated from there, with the group separating the pair and physically beating them. One man defended himself using pepper spray while the other tried to fight off his attackers by hand. Itzik Avneri, the owner of the boat cruise, had to step in to help.

“One of the attackers hit me and I fell on the ground,” one victim told The Post. “He came to me and said ‘I came back to you, you gay.’ I took my pepper spray and chased after him to spray him and then 20 Bedouins jumped on me. They jumped on me suddenly, for no reason. They wanted to kill me. Just because we were gay.”

Related: “No Longer Alone”: These Arab LGBTQ activists are speaking out in a powerful new PSA

Avneri also asked one of the attackers why they targeted the couple. “Because we’re Arabs and they’re gays, and there won’t be gays among the Arabs, it gives Arabs a bad name,” the man reportedly responded.

Video of the incident begins after a majority of the attack. It shows Avneri defending one of the victims, going so far as to shove one attacker in the water.

Police arrived on the scene soon after and arrested a 16-year-old suspect. Representatives for the suspect insist that the attack was provoked by the gay couple in question; that the couple made sexual comments to a group of men including the suspect. Furthermore, said representatives insisted that the beating was justified, telling reporters “That’s how it is. You don’t see that gay Arabs are attacked in Jaffa every day?”

Police have charged the suspect with aggravated assault and racist offenses. Law enforcement has also said the investigation is ongoing.