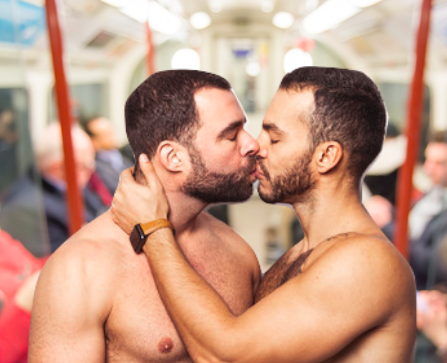 There’s a time and place for everything.

The incident happened one evening last February on the Northern Line between Leicester Square and London Waterloo. Mullan and Mason both pled guilty to one count of “outraging public decency” this week.

“On the 19th of February 2018, British Transport Police were contacted to a report of a video which had been posted online showing three men engaged in explicit sexual acts on a train,” prosecutor Victoria Murphy told the court.

Murphy went on to say that the man who reported the incident to police was also gay, though he did not know the men or partake in any of the action.

“[He thought] the video overstepped the mark and was morally unacceptable,” Murphy continued.

We’d have to agree. A crowded subway train is not the place to do the hanky panky.

Mullan and Mason are both scheduled to appear at Westminster Magistrates Court on February 1 for sentencing. They could face fines, curfews, and even jail time.

Police have been unable to identify the third man in the video. As of now, it appears he has gotten off. No pun intended.