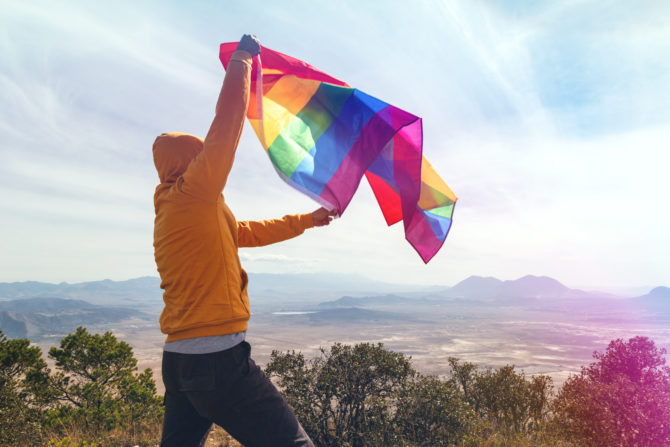 A gay couple woke up to a scene that’s unfortunately all too common — the pride flag hanging outside their home had vanished.

Charlie Olivo and his husband were shocked. Sure, they had heard stories of similar thefts around the country, but they never would have imagined it could happen in their quiet University Heights, Ohio neighborhood.

The couple posted about the assumed act of homophobia on social media, hoping the crime may have been caught on a neighbor’s security system. They were blown away by the support they received.

Olivo’s community was outraged to learn about the flag’s disappearance. One neighbor, Joe Hochhieser, even offered to replace the flag and donate ten additional ones to other houses in the area.

And while Olvio’s outreach beautifully banded the community together, it yielded no clues in solving the crime.

Fortunately, another detective was already on the case — the couple’s dog, Daisy.

And when the thief returned to the scene of the crime one night, Daisy sprung into action.

“I said ‘Oh my gosh, I think that’s our pride flag’ and I looked and saw a big, fat raccoon walking up the limb, back and forth.”

Assuming the raccoon had no homophobic motives, it turned out the pride flag theft was a bit more harmless than originally feared. The fabric was being used as a rainbow-colored nest.

“We were shocked and a little bit like, ‘Oh my gosh, we can’t believe this happened,’” Olivo said.

“It was very heartwarming, pretty funny but a good ending. He can keep the flag,” he added.

And folks held onto the ones Hochhieser donated, too. Now there are eleven pride flags flying high in the neighborhood.