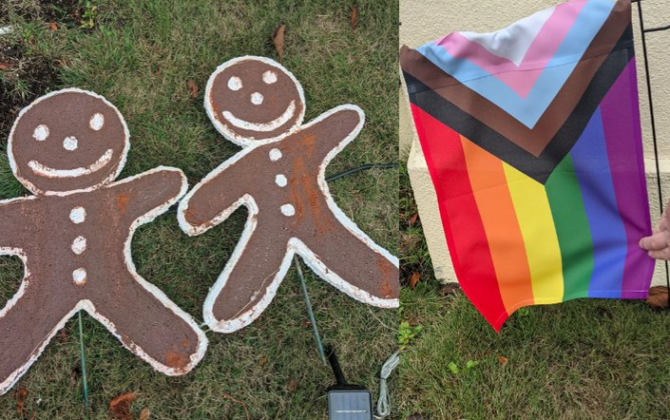 Police in Eureka, California have opened a hate crime investigation after the home vandalism of a local gay couple. Brian Kleinmeyer and Daniel Kain woke up to find their handmade Christmas yard decorations torn down and smeared with feces.

The Lost Coast Outpost reports that Kleinmeyer and Kain discovered the attack on Wednesday morning. Kleinmeyer noticed that a decoration of two gingerbread men holding hands had been torn from the ground, and placed next to the couple’s pride flag. A closer examination revealed that vandals had also smeared the gingerbread men with feces.

“Last night, somebody came to our home on Myrtle, and wiped feces all over our Gingerbread Men,” Kleinmeyer wrote on Facebook. “They literally ripped them out of the ground, and wiped their asses with them, and carefully laid them at the base of our Pride Flag… I thought things might get stolen, but never in a million years did I think this would happen. I’m completely in shock.”

A call to police prompted a formal investigation into the incident as a hate crime.

Related: A gay man was stabbed and beaten by a Jeffrey Dahmer fan. Police say it’s not a hate crime.

“It’s very clear in my mind this was a deliberate act based on the suspect’s perception of [the couples’] sexual orientation,” Eureka Police Chief Steve Watson told the Lost Coast Outpost. He further described the hate crime as an “absolutely horrendous and appalling thing.”

Last night, somebody came to our home on Myrtle, and wiped feces all over our Gingerbread Men. They literally ripped…

This also isn’t the first time Kleinmeyer and Kain have had their Christmas decorations vandalized. Two weeks ago, the couple reported having a Santa’s sleigh decoration torn in half and Christmas lights tangled in their yard.

“Something about two Gingerbread Men holding hands just pushed them over the edge, I guess,” Kleinmeyer told The Outpost.

“This kind of hate is not going to be tolerated,” Chief Watson added. “We’ll throw every resource we have into identifying, pursuing and arresting whoever’s responsible, as well as working with the District Attorney to make sure they’re prosecuted to fullest extent of the law.”

If convicted, the perpetrators of the crime could face a $5,000 fine and up to a year in jail.

In a heart-warming coda, Kleinmeyer and Kain report an unexpected outpouring of support and warm wishes in the wake of the incident.

“I’m not going to lie,” Kleinmeyer told The Outpost. “I didn’t cry over our decorations being vandalized, but I did from the kindness we have been shown since it happened. I’m completely blown away.”