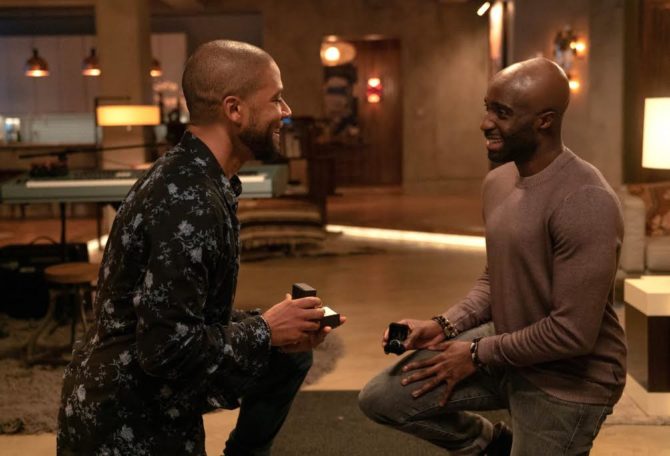 Toward the end of last week’s midseason finale of How to Get Away with Murder there was a wedding moment that might qualify as the schmaltziest thing I’ve seen on TV in years. The absentee father of tech genius Oliver Hampton, one of the grooms, placed a long distance call to his son and encouraged him to go big before going home.

Oliver’s idea of big: singing John Legend’s “All of Me” to his new husband, lawyer-in-training Conner Walsh.

It wasn’t the song (of which I’ve never been a fan), but the sentiment that really got a hold on me. I can’t deny it: Years of bad romances and fleeting flings had left me ready to close the book on the dream of everlasting love.

But as I watched Oliver serenading Conner, I felt a vicarious rush from their mutual adoration. I wanted so badly to feel what Oliver was feeling, and I started making a mental list of potential wedding songs for when I finally stumble upon my Conner. I settled on Karen Carpenter’s “All Because of You” and played it on repeat after the episode was over.

Love is a dangerous–and occasionally deadly–game on How to Get Away with Murder, a show centered around the personal and professional trials of Viola Davis’s shady legal eagle Annalise Keating, and the gay boys are the only ones winning. While Will and Grace has yet to give Will a substantial love interest one and a half seasons into its revival, Oliver (Conrad Ricamora) and Conner (Jack Falahee) take the prize for HTGAWM’s tightest twosome.

It’s not even close to horse race. Every other regular character has had multiple lovers come and go, but Conner and Oliver’s boo thing, which started as a scam, has spanned practically all four and a half seasons of the show. That’s an eternity in TV time!

Conner and Oliver aren’t HTGAWM’s only so-happy-together gay duo. The former’s sometimes-estranged father, who came out as gay later in life, paid for his son’s nuptials and brought his partner as his date. He even shared a slow dance and a tense conversation with his new son-in-law (during which he implored Oliver to protect Conner from his own worst impulses), which has got to be a primetime-TV first.

A network or two over, on Fox, Empire is treating Jamal Lyon (Jussie Smollett) and his fiancé Kai Givens (Toby Onwumere) like any other couple, only better. Sure they’ve had some gay-centric moments–Jamal’s mother Cookie struggling to accept Kai’s HIV status, Lucious struggling to accept that his son is marrying a dude?–but Jamal and Kai, like Conner and Oliver, are the show’s healthiest pair this season. (Cookie and Lucious’s ride-or-die love, though solid, is hardly healthy.)

Their proposal might be the best one on TV this season. As Kai got down on bended knee and presented Jamal with an engagement ring while popping the question, Jamal did the same. Great minds. This is some serious Moonlight love.

Despite his parents’ misgivings (Cookie and Kai’s cards-on-the-table conversation was beautifully acted by Onwumere and Taraji P. Henson), Jamal’s two straight brothers are both supportive. His alpha-male younger sibling Hakim, a rapper with hothead tendencies, might be Jamal’s biggest champion.

Empire is set in a hip-hop industry that is known for its rampant homophobia, but Hakim shows us the other side, the one on which pro-LGBTQ real-life rappers like Kanye West and Jay-Z stand. He could teach some non-fictional MCs a few things about wokeness that extends beyond matters of race.

The movies also could learn a few things from HTGAWM’s and Empire’s presentations of LGBTQ characters. While movie critics carp about how Bohemian Rhapsody glosses over Freddie Mercury’s queerness, and gay characters in movies are either tortured and/or star-crossed leads (Call Me by Your Name, Boy Erased) or supporting players more invested in the lives of the straight leads than their own (last year’s Best Picture Oscar winner The Shape of Water, Crazy Rich Asians, My Best Friend’s Wedding), both series are going all the way this season with characters who happen not to be straight.

They fight. They make up. They have sex. They have lives–messy, complicated lives. Oliver and Conner’s story is particularly rich and resonant because it’s been building over the course of five seasons to that lovely “All of Me” climax.

Of course, as in real-life relationships, it’s not all sunshine and butterflies. On Empire, Jamal spent a couple of episodes fearing that Kai, a journalist, might have been killed while on assignment in a danger zone. Meanwhile, Conner and Oliver, who, like Kai, is HIV positive, have had to deal with parental challenges, insecurity issues, and literally getting away with murder.

Personally, I wouldn’t want any of that for my next great love, but I’ll weather the storms if at the end, there’s a shining moment, a rainbow for three: him, Karen Carpenter, and me.