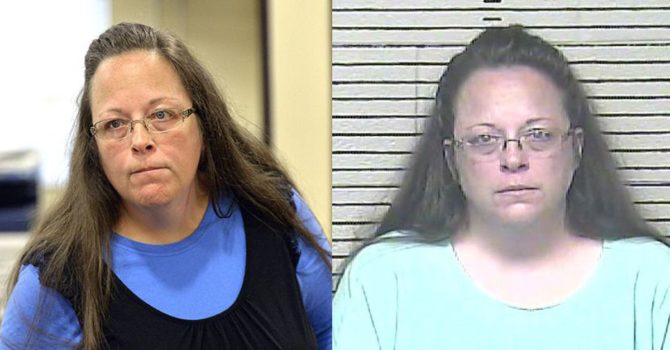 Here’s a modest ray of schadenfreude in the increasingly gloomy news cycle — gay couples wronged by Kim Davis have been given the green light to sue her in federal court.

Davis, if you need reminding, is the Kentucky clerk who after being married four times herself, drew a line in the sand when same-sex marriage became the law of the land, refusing to issue marriage licenses to gay couples. She cited her Christian faith, naturally.

In November of 2016, attorneys representing the couples who initially filed suit against her asked District Judge David Bunning for $233,058 in legal fees and costs.

Related: Disgraced: A Look Back At Kim Davis’ ‘Greatest’ Moments One Year After Marriage Equality

Davis’ lawyers at the antigay Liberty Counsel made the argument that she shouldn’t be on the hook given Kentucky’s move to remove county clerks’ names from state marriage license. They said the issue was moot.

The counterargument? Basically — “No honey, you still broke the law.” At the time, however, it looked like Davis’ side had scored the victory.

That is, until this week, when the 6th U.S. Circuit Court of Appeals in Cincinnati reversed a lower court’s ruling that damages claims made by David Ermold and David Moore were moot after the state’s license switch-up.

Related: Kim Davis Is Trying To Rewrite Her Antigay History; Too Bad The Internet Remembers Forever

Even though the couple did eventually get their license, a three-judge appeals court panel found that they could still sue Davis for the initial refusal.

Michael Gartland, one of Ermold and Moore’s lawyers, is hopeful that the ruling will stand now that the case has been sent back to Kentucky.

“The next step will be to go to discovery and go to trial, where I am confident we will obtain a judgment against Davis,” he said.

Watch Davis in her breakout role refusing a license to Ermold and Moore below: