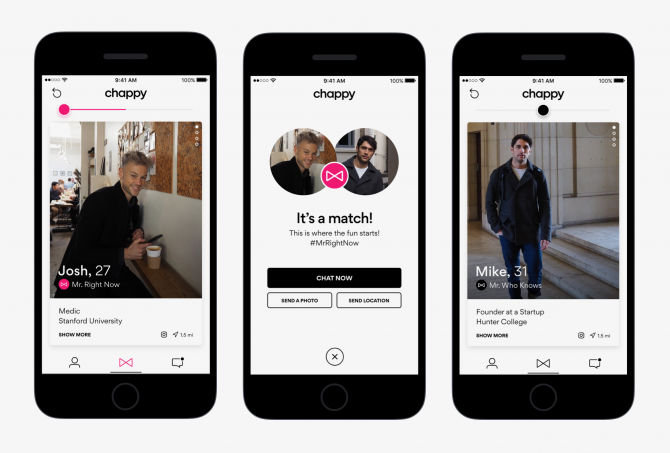 Chappy is ending its relationship with your phone, which means the only remaining apps for same-sex meetups are now Grindr, Tinder, OKCupid, Bumble, Scruff, Growlr, and if you’re kinky, Christian Mingle. Oh, and the several other smaller ones we’re not listing.

In other words, it’s a saturated market out there, and ultimately Chappy couldn’t retain a dating pool big enough to thrive.

The gay dating app will be folded into Bumble, which had been an investor since Chappy’s launch in 2017.

Related: New dating app will only reveal photos if you and other user share interests

“It’s been an incredible three years and we couldn’t be more grateful for the hundreds of thousands of you that have joined us on our mission to create a space for gay connection. While it’s the end of the road for Chappy, all is not lost!” reads the app’s FAQ.

“We’re joining Bumble because we have the opportunity to take what we’ve built together here to the next level by creating a space for healthy and safe connections across the LGBTQ+ spectrum,” the team adds. “Bumble is committed to fighting all kinds of inequality, and we’re excited to land our spaceship safely in the Bumble Hive.”

Chappy set out to carve a niche in the gay dating landscape by offering users three types of connections — casual, commitment, or exploring. It boasted 610,000 registered users. For reference, Bumble has 65 million.

In 2018, Chappy moved its offices from the U.K. to Austin, TX, where Bumble is headquartered, suggesting the deal may have been in the works for quite some time.

Chappy users are no longer able to swipe new matches as of Feb. 18, but users will receive a weeklong free trial of Bumble Premium. Score?