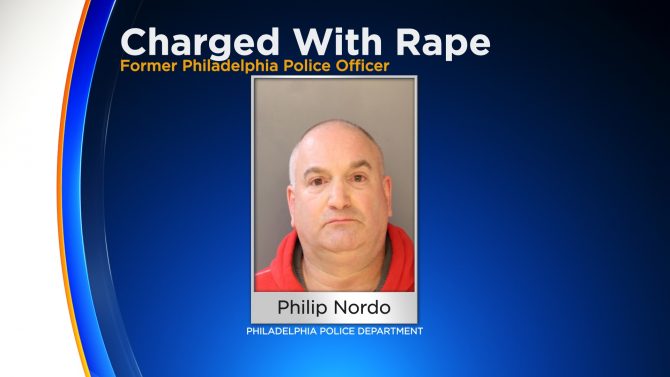 An ex-cop from Philadelphia was just arrested on allegations that he sexually assaulted several male witnesses and suspects over the course of his decade-plus career as a detective.

52-year-old Nordo was fired in 2017 amid allegations that he funneled money into an imprisoned witness’ commissary account and that he maintained inappropriate relationships with people connected to criminal investigations.

But a deeper investigation into the matter revealed Nordo was up to much more than just fraternizing with suspects and witnesses.

The grand jury found that Nordo “repeatedly contacted young men that he sought to groom,” and used threats and flattery to “make the targets of his advances more susceptible to his sexually assaultive and/or coercive behavior.” Prosecutors said Nordo’s tactics included threatening to arrest or jail suspects without probable cause, fraudulently steering reward money their way, and projecting his dominance–sometimes by displaying his firearm, other times by targeting handcuffed prisoners.

Most of the alleged abuse happened inside interrogation rooms or prison visiting rooms.

That victim reported the incident to jail employees, but it was unclear from the report whether any disciplinary action was taken. The grand jury report noted the victim has since died in a homicide and the case has not been solved.

According to the heavily redacted grand jury document, Nordo would frequently “use small talk” to make his victims feel comfortable before ultimately turning the conversations to sex.

He would allegedly make inappropriate comments about the men’s genitals before assaulting them, preferring to target men in handcuffs or leg shackles so that “his dominating position reduced the individuals’ ability to resist or report the assault,” the document says.

In recorded phone calls, he would talk about having sex with the men using “code words,” the document alleges.

For those who cooperated, Nordo rewarded them with gift cards or deposited money into their inmate accounts, prosecutors said. In some cases, he prevented charges from being formally filed against the man, and in others, he requested leniency from prosecutors or judges.

“We have been able to determine as part of our investigation both here and the grand jury that no one else is connected to this in any way,” Ross said.