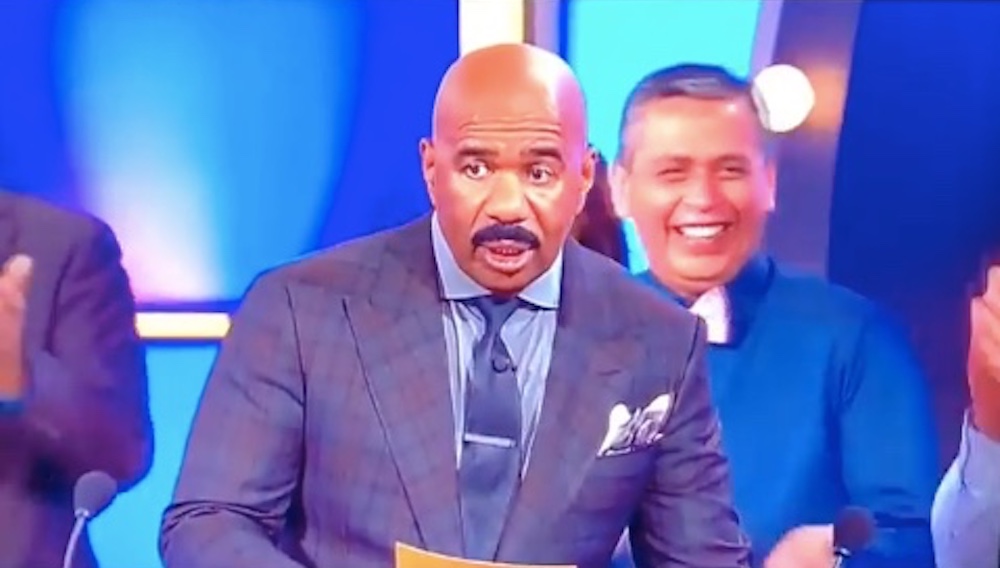 Harvey asks Kizer, “Are you married?”

“Are you dating somebody?”

“He’s lookin’ pretty good!” Kizer answers to the delight of his applauding teammates and the cheering audience.

Meanwhile, Harvey’s face freezes in a surprised expression for about 20-seconds as he glances to the side and directly at the camera. Afterwards, Kizer offers to still answer the question and Harvey says, “Yeah, it ain’t no problem. Sue me, but I’m here,” a possible reference to his shocked expression.

Harvey’s reaction is definitely overdone—a man dating a man is hardly so mind-blowing that it should leave a game show host speechless and frozen in disbelief. But Harvey is a straight comedian panning for laughs in a 43-year-old game show with a predominantly straight home audience.

Harvey plays up the unexpected moment for laughs, though we personally would’ve loved it if Harvey had congratulated Kizer or asked him to give his fella a shout out. (In the past, Harvey has said that gay men aren’t “real men,” but he has also said that parents shouldn’t disown their LGBTQ children.)

If anything, the moment just shows that you should never assume that the person you’re talking to is straight (or gay for that matter—bisexuals exist).

We haven’t been this happy with a gay game show contestant since comedian Louis Virtel snapped his way through three rounds of Jeopardy, or when Jeopardy contestant Jason Keller suggested that Magnetic Fields singer Stephen Merritt basically developed a small crush on him through the show.

When your friend Boone is totally going to be on one of those “Best Moments of Family Feud” videos on YouTube! ??? Shout out to Nick, the guy who’s “looking pretty good” for capturing this gem ??