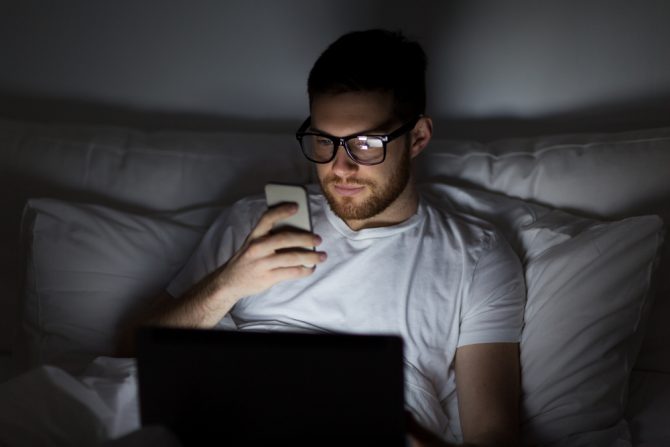 Grindr isn’t always a grid of strangers—every once in a while, you’ll see a familiar face or a name you recognize!

On the r/askgaybros forum, gay dudes shared the times they found someone from their offline life on Grindr and other dating apps. Awkwardness abounds, as you might imagine, although some of these tales had a “happy ending.”

We’ll let these guys’ (lightly edited and abridged) stories do the talking, but let’s just say that some of these encounters would make an HR rep scream.

“My older cousin. Disclaimer: Most of our family pretty much knew he was gay. … But one day I found him on there, leather pants and high-heeled boots.”

“I met a friend from a social club through a Danish gay-dating site called boyfriend.dk. I wrote, ‘Oh hey there! Couldn’t help noticing you. I will not tell anyone else about it. I just wanted to say hallo,’ because he was closeted. I got invited when he got married to his husband, and it was amazing.”

“Some frat boy who was in my RA’s friend group in college. He unmatched me on Tinder though after he came over to our floor to chill with my RA, and he saw me. We were already sexting at that point. To this day, he’s still on and off with different girls. I don’t know if he has finally come out. I don’t care enough to ask.”

“Four or five years ago, I came across this guy I went to elementary school with. (I was 20 at the time.) He was in my second-grade class and often made fun of me for ‘acting like a girl.’ … We matched and talked, and it seemed he had no idea who I was. Didn’t remember me at all. It was hot to get this guy who was homophobic towards me years earlier to moan and tell me he wanted it harder.”

“I’ve come across two-in-the-closet people on the Grind. With the latest one, I was slightly insulted ‘cause the guy doesn’t even know we work together. Like, dude. Come on.”

“Found a chill guy I knew from high school through an NSFW Snapchat group. I hadn’t shared my face in that group, and when we chatted a bit in DMs, we eventually shared our faces. He didn’t respond after I sent mine, and eventually, he left the group and blocked everyone on it, including me. Guess once he recognized me from an anonymous group, he got scared, and ran, haha. Chill dude, though. Wish he would’ve stuck around.”

“High-school classmate messaged me on Grindr. … After chatting for a bit, he says something along the lines of, ‘How have we both lived in the same town our entire lives and we’ve never met? You’re, like, the perfect guy.’ He sends a face pic, and I say ‘I hate to burst your bubble, but we’ve definitely met. We went to school together.’ I sent him my face pic, and he immediately says, ‘Please don’t tell anyone,’ and blocks me, lol.”

“Yup, and he wanted to hook up. I was like, no, that could complicate things. We have a mutual friend, and our friend doesn’t know about him; however, he knows about me. I just don’t like drama, so it was a hard pass.”

“I moved back to my hometown eight years ago. Ended up meeting a straight, married classmate who responded to an ad I placed on the old Craigslist with his real email address, which was his name. We’ve become good friends and spend quality time together almost every week.”

“A guy whom I still consider a friend, who had moved away. I saw him on Tinder not too long ago but never swiped on him, although I think we would be a cute couple. I mean, two Kyles who like to cook would be a dangerous thing. I have talked to him once or twice this past year but have not said anything to him. Next time he’s in town, I may grab some beers with him and see where it goes.”

“A bully from elementary school. … He terrorized me for all of elementary school. Thankfully, he moved after elementary. When I signed up, after high school, I saw him. I instantly recognized him and blocked him. He’s been on my blocklist since, and I don’t see myself taking him off. Yes, he’s attractive physically but a sh*t human being, and I have respect for myself.”

“This just happened to me. My company brought all our people from offices nationwide to a sunny city 1,000 miles away from my home for a summit. I was on Grindr and Scruff, making the best of every free moment. … Someone who met my criteria but had no pics was only 81 feet away! I headed towards the elevator hoping I’d close the distance, when around the corner comes the co-president of the company (who’s out and married to a man), also on his phone. He looks up at me, turns a funny shade of gray, recovers, greets me, and we ride down in silence. I have pics on my Grindr profile, face pics even. And my, um, request is very direct and specific. So if he was viewing me, he now knew just what kind of ho I am.”

“I matched with my manager at work. We both laughed it off and never spoke about it.”