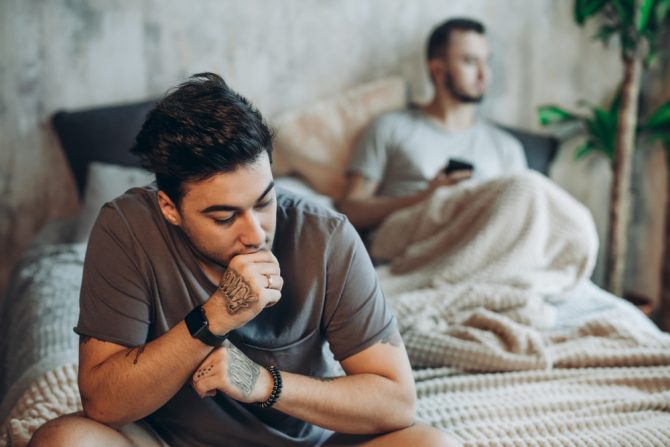 Breaking up is hard to do… unless it’s not. After a Redditor asked, “Other than cheating, why did you leave your ltr ex-partner?” in a recent r/askgaybros thread, some users described heartbreaking break-ups, and some described liberating splits. (It’s one thing if you and your man are just in two different places in life, and it’s another if he’s stealing your money.) Here’s a selection of responses, edited for readability:

“We were both in a bad place. The relationship was alright, but with various life things each of us [was] dealing with, the relationship was second fiddle. So when the opportunity for me to move out of state and fix my situation arose, I took it.”

“Relationships can fizzle out just like they initially flare up. We just stopped enjoying each other’s company. Different interests. We’re still friends, but better that we live at different addresses and f*ck different people.”

Related: Gay guys list the first-date behaviors that immediately turn them off

“The sex was never great, but it became rarer and rarer, so we tried opening the relationship, but it got to the point [where] we were just best friends who once every couple months would have sex. So we broke up and became best buddies.”

“I was bored and unhappy. I never fit in with his family and hometown and family-oriented lifestyle. It’s [a] very small town. Bedroom had been dead for 6 years. He gambled away over $30k, and I had to bail him out, something that set me back a great deal. I didn’t even care if he cheated or not.”

“I found out he was running meth cross-country.”

“The relationship we agreed on wasn’t what either of us wanted ten years later. Heartbreaking.”

“One, we broke up because he and I dated right after (literally the day after) I got out of a relationship and I needed time to be single. We’re still good friends and both agree we’d give it another go when we’re in the right place mentally. The other, it was a long distance relationship, which was part of it, and the other part was he didn’t value or understand my career and the commitments it requires at times.”

“The time I spent with school-related matters became a source of contention, as well as family meddling that made it difficult to be in a relationship. I’d never get into a relationship again unless I were independent.”

“We were together during our college years and a few beyond that. It was a time of growth and coming into ourselves, and we ultimately realized that we just wanted/needed very different, incompatible things.”

“The sex was horrible, and he was very selfish. He played [World of Warcraft] for 12–14 hours a day and barely had time for anything else. We simply were not compatible. He invited me to dinner three months later, apologized about wasted time and opportunities. Asked if I’m interested. I had completely moved on.”

“Just not the right time for us. I was working and investing so much time in my career as a mid-20s guy with almost no money, hoping I would get my shot. He was in college figuring out life as an early 20-year-old and having fun. He was my first boyfriend, I was his second. We both lacked the right communication tools to really understand each other and I guess also maturity. Loved that man so f*cking much, but sometimes we would just not click. It felt so bad at times. I just felt alone in the relationship, and I think he did, too. I wasn’t the best supporter for him; I was selfish at that time. We had an okay breakup, decided to remain friends but we couldn’t, finally decided on no contact to really close it off and haven’t really spoken to each other since. I miss him a lot. Wish he was still a friend I’d get to hang out with from time to time.”