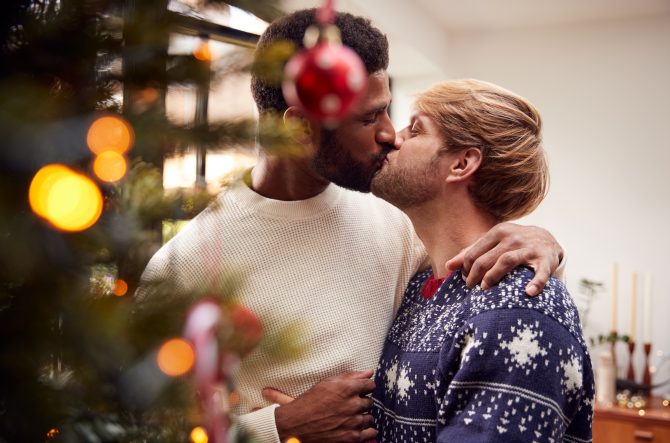 It’s the most wonderful time, indeed! In two Reddit threads, gay guys have been telling tale of their yuletide hookups, and let’s just say their stories are less “God Rest Ye Merry Gentlemen” and more “I’ll sext these hairy gentlemen!”

We’ve included some highlights below — barely censored and edited for readability — so consider this your NSFW warning!

“We’ve been together for 10 years, and we’re both older, so sexy time between us has become a little routine. Not yesterday. I got a red union suit as one of my presents, and it feels real nice and looks a little sexy. Maybe it was that. Maybe it was being a little high on sugar from all the sweets. About an hour after opening presents and relaxing into our day, I started stirring it up, and he was game. In a few minutes, we were making out like teens in the back of the car. We had our first morning sex that we’ve had in months right there next to the tree.”

“Just the standard ‘Xmas at boyfriend’s parents’ place and his parents were moving around a lot, including in the office/room that was on the way to my boyfriend’s room so it made sex a very quiet and nervous practice’ story that I’m sure everyone has.”

“I had just gotten back from visiting my parents for Christmas and was away from my boyfriend for over a day. I had previously watched a movie I had no interest in watching and my boyfriend told me I deserved something special for watching it with him. When I got home, he told me it was time he paid me back. I immediately took off my clothes, and walked to the bedroom. He told me he wanted to give me a massage, so I laid on the bed. He told me to close my eyes and wait for him. I’m normally the aggressive, dominant one, but I let him take control…”

“Been meaning to meet my new neighbor who popped up on one of the apps and lives a few buildings over, but we’ve both been busy with work for months, and you also just never know if it’ll be good or worth it. Finally, on Christmas Eve, we’re both free so we manage to meet up. Had pretty good sexual chemistry, so I’m looking forward to doing this again. Not every day that you get to meet someone who lives so close. It’s going to be a good gift of relaxation for the new year.”

Related: Gay guys tell the tales of their most spontaneous hookups

“One of my first gay experiences happened around Christmas when I was 19. I stayed at college over Christmas break. Not many students on campus. I sat down at a table with handful of foreign students at breakfast on Christmas Eve. I started chatting with the Spanish guy, Nic, at the table. We both wanted to go see the same movie, and I had a car, so I offered to drive us to the theater. [We] paid for our own tickets/drinks etc. About halfway through the movie, he put his hand on my knee. Just for a second. I didn’t think anything of it. After the movie we grabbed Christmas Eve dinner at a Perkins. We had really hit it off. We went to his dorm to ‘drink some beer.’ He kissed me as soon as we went in. You know the rest…”

“Had sex with my boyfriend of five months for the first time, yesterday. Hadn’t had sex for almost six years after being a survivor of an abusive relationship. I know it’s not a particularly sexy story, but I’m so pleased to have finally broken that barrier!”