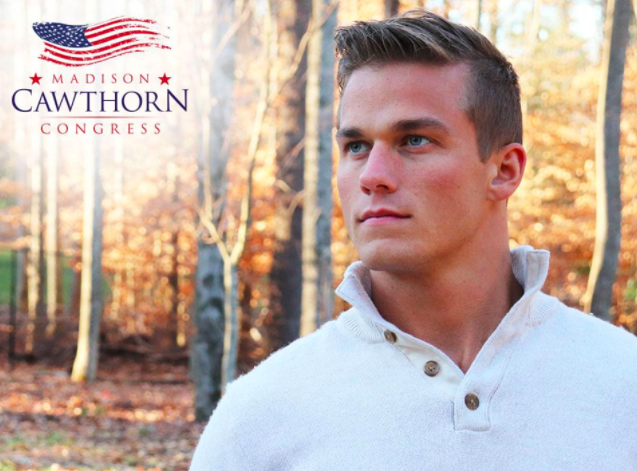 Out candidates Ritchie Torres and Mondaire Jones both won their primaries in New York. If elected in November, they will become the first openly gay, Black members of Congress.

Meanwhile, Alexandria Ocasio-Cortez also won her first primary as an incumbent, meaning she’ll very likely hold onto her House seat in the fall.

And then there was Republican Madison Cawthorn of North Carolina.

Prior to running for office, Cawthorn, who was partially paralyzed in a car accident in 2014, was perhaps best known for being a motivational speaker and for posting thirsty photos to Instagram.

If you’ve never had your mobility taken from you, you might not be able to appreciate this post. I got to hop in a swimming pool today! (Thanks to @cristina_bae4 ) it was so fun to not have any assistive devices helping me, just my body propelling me through the water. Super blessing! •• • #swimming #travel #blessingoftheday #makeithappen #freedom #outofthechair #wheelchairtravel

& shake it all up. 🙂 • • • So, so, blessed I get to travel. For me it has been the most empowering thing for me since my accident. Getting to go out and adventure and overcome barriers and obstacles in countries where they don’t make accommodations for wheelchairs makes my life at home in the States seem so easy. Thankful God created such a beautiful world for us to explore. “The world is a book and those who do not travel read only one page.” – St. Augustine

Never let anyone tell you what you can or cannot do. Conquered yet another vehicle since being paralyzed. • • I love all this warm weather and fun (and @cristina_bae4) but I cannot wait to get back to Western North Carolina! Lots to do be done in our region in 2020. Let’s make it the best year yet! God bless.

As much as I love intensity and pressure I have to say, leaning back with a cigar; talking about deep thoughts I can’t find an answer to on my own with my mentors and best friends is one of my favorite things in life. You can cut down a tree way faster if your saw is sharpened. So remember to always take a break and sharpen your saw, work smarter not harder. • ••• #rest #recovery #sci #cigar #padron #brothers #mentors #deep

Well nobody died today, it was a good day. Also I caught a barracuda and I’m flexing in this picture.

But before you go getting all dehydrated, you should probably know that he’s a “pro Trump” Republican who has vowed to protect “religious freedom.”

“I’m running because our faith, our freedoms and our values are under assault from coastal elites and leftists like Nancy Pelosi and Alexandria Ocasio-Cortez,” his website states. “I will be a strong voice for faith, family & freedom.”

Prior to yesterday’s unexpected victory, few outside of North Carolina knew who Cawthorn was. Now suddenly he’s making national headlines. And he has Gay Twitter totally divided.

There are some who don’t seem to care that he’s clearly not an LGBTQ ally and that, if elected, will likely vote against their best interests…

Madison Cawthorn, my god. If he didn’t exist you’d have to invent him.

listen, I'm a sexual being and everyone needs to understand that

I was gonna politefully request 24 hours to thirst over Madison Cawthorn but I just can’t with that popped collar.

Oh god. The gays™? just found out about Madison Cawthorn.

Less thirsting over Republicans like Madison Cawthorn with bad politics, more loving ourselves and thirsting after actually progressive and gay candidates like Ritchie Torres

Hey Gays, we are not gonna pine after Madison Cawthorn who is pro-Trump and problematic on almost everything he's publicly said he stands for.

Control yourselves. It's embarrassing.

Gays: Ugh, Aaron Schock is the worst. I hate Republicans.

If I see one more thirst tweet about the Republican twink Madison Cawthorn. Y'all can find the exact same store brand white guy with abs at Logan Circle or Vida Pool.

If white gays are going to thirst after someone, it should be this guy. Not Madison Cawthorn. ? https://t.co/7qneuzy447

Cawthorn will face off Democrat Moe Davis this November in what will surely be a closely watched race.