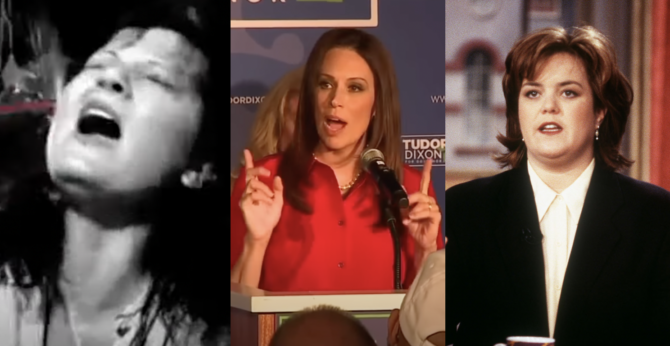 Local businesswoman and conservative nutjob Tudor Dixon clinched the GOP nomination for governor in Michigan this week, winning nearly every county in her state. She will now face off against incumbent Democratic Gov. Gretchen Whitmer this November in what is expected to be a closely watched election.

According to her campaign website, the 45-year-old mother of four is a 2020 election denying forced birther who wants to ban public schools from talking about anything LGBTQ-related, police what bathrooms trans kids can use, and “protect young girls from being forced to compete against biological boys” in sports.

She is also vehemently anti-drag queen, telling an AM radio host in June, “Of course, these are sexualized shows! We have folks that are really working hard to oversexualize our children. This is what we’re fighting against right now. It is the battle against family!”

In short, she’s about as anti-LGBTQ as Republicans come these days. Which is why it’s so very strange that she once worked for one of the most powerful lesbians on daytime television: Rosie O’Donnell.

Prior to her recent foray into politics, Dixon, who has never held public office before, was an anchor on the conservative propaganda network “Real America’s Voice,” which also hosts Steve Bannon’s show “War Room.” Before becoming radicalized, however, she was just a regular person working in regular media.

Early in her career, she reportedly interned at her local news station and on “The Rosie O’Donnell Show” before later getting a full-time job as a production assistant for the Oxygen Network, which was co-founded by Oprah Winfrey.

Ironically, in addition to being hosted by one of the biggest lesbians ever, “The Rosie O’Donnell Show” was arguably the gayest show on daytime TV in the late ’90s and early ’00s, regularly featuring performances by Broadway casts and interviews with LGBTQ celebrities and allies.

Dixon apparently didn’t seem to have an issue with any of that back then. But now that she’s the Republican nominee for Governor of Michigan, suddenly all the gayness is a problem.

According to IMDB, Dixon also appears to have dabbled in film in her younger years, performing in several low budget, locally-produced indie projects filmed in Kalamazoo, including the raunchy 2012 sex comedy/horror flick “Buddy BeBop vs the Living Dead”, which depicts several women being attacked, sexual assaulted, and peed on by male zombies.

Prior to Dixon winning the GOP nomination, Whitmer was seen as potentially vulnerable heading into November because of frustrations over her pandemic response, rising food and gas prices, and her ties to President Biden, whose approval ratings are low. But many Democratic strategists are breathing a cautiously optimistic sigh of relief now that Republicans have named the zombie golden shower movie lady as their pick.