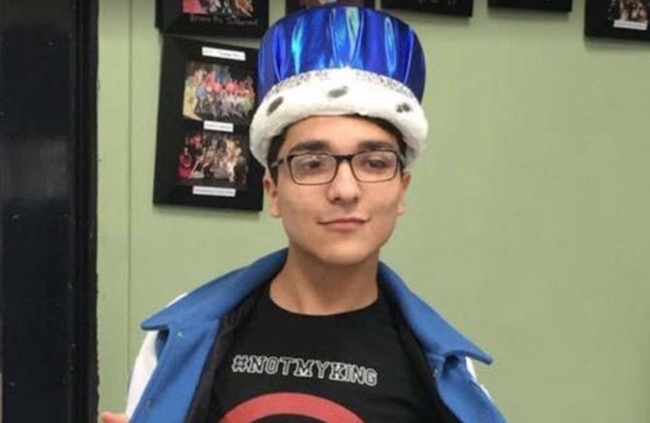 When Joel Mireles decided to run for Homecoming King, he didn’t expect to win.

A gay student at Brazoswood High School in Clute, Texas, Mireles was keenly aware the winner is usually someone “who’s in athletics or usually it’s football,” as he tells WMAZ.

Nevertheless, he campaigned and won, much to his shock. Disappointingly, the announcement didn’t sit well with some of his peers, who proved themselves to be genuine grotesqueries by creating a #NotMyKing hashtag and even T-shirts.

“My friends kept showing me all these posts on social media that were really negative about me,” Mireles tells WMAZ.

“I didn’t want to go eat lunch because I thought people were looking at me so I stayed in the theater classroom and told my mom to come pick me up early.”

But Mireles masterfully turned the tables with a simple gesture: he bought one of the T-shirts for himself and wore it to school.

His cousin Danielle Peña photographed Mireles in the crown, letterman jacket, and T-shirt, posting it to social media with a message of her own.

My younger cousin worked his butt off to put his name out there to be elected Brazoswood Homecoming King. It was a proud…

Here’s her message in full:

“My younger cousin worked his butt off to put his name out there to be elected Brazoswood Homecoming King. It was a proud moment considering not a lot of people in my family have the guts to really go for something like that. He won. He worked for something and won. Soon after, a lot of kids were on the internet saying some really, really hateful things. Jealous kids. They even went to the extent to make shirts stating #notmyking.

I was angry, almost in tears, but Joel reassured me, “It’s okay, it doesn’t bother me. I won! They can’t take that from me..” He was right, but I still felt something needed to be done for the terrible actions of these bullies. I called the school and was told by the receptionist after she spoke to the principal that the “situation was taken care of” and they had spoke to the kid making the shirts and Joel, but they couldn’t disclose if there were consequences. I asked if the principal could call me back. She never did. This was a week ago. They never spoke to Joel, and there were never any consequences for the kids behind it.

What if Joel wouldn’t have been who he is? What if this ended in tragedy? Brazoswood needs to hold these kids accountable and stop avoiding this situation. You deserved that crown, Joel. Now I’m the one who looks up to your courage. I hope one day I am not affected by the hurtful hate in people’s hearts. I love you so much and I’ve never been so proud!”

Mireles aptly explained why he bought one of the shirts: “I just thought, if I bought one, it would be a statement saying, ‘This isn’t affecting me and you guys aren’t hurting me’.”

Oddly, Danny Massey, the superintendent for the school, denied any student designed the T-shirts, so Mireles sent over a screenshot of the sales page to The Houston Chronicle: 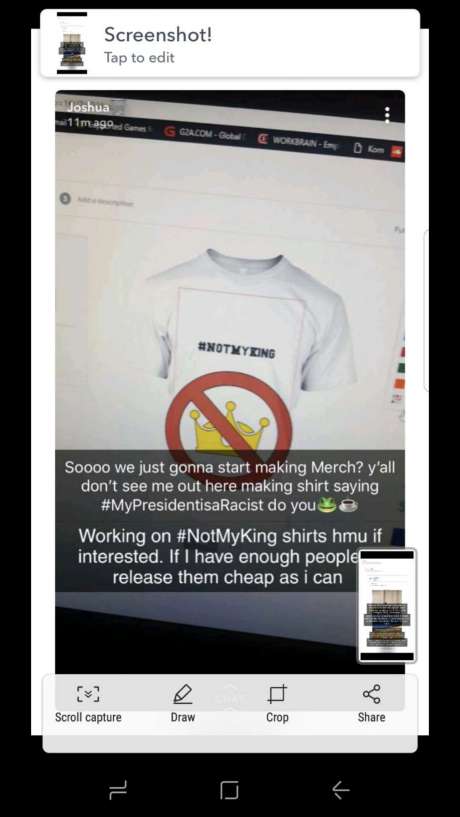 “We are proud of Joel and our Homecoming Queen for being selected by a popular vote of the senior class to represent Brazoswood for Homecoming two weeks ago. We take claims of bullying seriously, and are dedicated to ensuring all our students are learning in a respectful environment.

No Brazosport ISD student has sold, wore or distributed shirts displaying the hashtag #notmyking. Brazoswood High School’s Homecoming king purchased the shirt shown on social media for himself online. Joel is a great kid attending a great school and has a very bright future.”

Mireles told Chron.com that he knows the student who created the T-shirts, but doesn’t want to give a name, though he even captured a screenshot of the T-shirts being made on Snapchat.