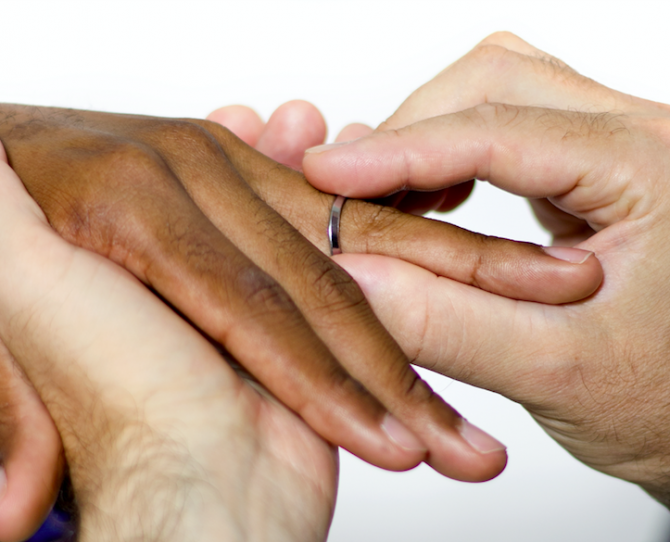 Two prison inmates just made history for being the second same-sex couple ever to tie the knot inside a correctional facility of a European Union member country.

“We dare, we dare, we asked,” Tontian tells the AP. “There is no shame. Love has no shame.”

The newlyweds, who were both rejected by their families for being gay, met during a prison bingo tournament. Their relationship grew when they were granted special leave to attend the Pride parade in Cyprus.

Eventually, Tontian finished his sentence, but he was so in love with Da Costa that he intentionally broke the law again just so he could be sent back to prison and they could continue living together.

Prison guards have been supportive of the relationship from the beginning. The couple has been allowed to work together and share a cell, and inmates who harass have been transferred to other wings.

Tontian says they decided to formalize their relationship in an effort “to get closer to one another.”

In Cyprus, same-sex marriage isn’t legal but couples can enter into civil unions, which grant them all the same rights and privileges as married couples except for the adopting children.

Cyprus’ Prisons Director, Anna Aristotelous, and her deputy, Athena Demetrou, helped the couple in gathering the necessary paperwork to file for the civil union.

After some delays, mostly due to governmental red tape, a ceremony finally happened last week in the prison theater. Tontian and Da Costa exchanged vows in front of prison staff and a handful of inmates and friends. Afterwards, they enjoyed a wedding cake.

Aristotelous says the union shows the facility’s respect for people of all identities, sexual orientations, and backgrounds.

“The anachronistic perceptions of a few stood as no obstacle for us or to the equal treatment of all,” she says.

Both Tontian and Da Costa are scheduled to be released from prison around the same time in June. Once they are free, they say they plan to continue living together in Cyprus.