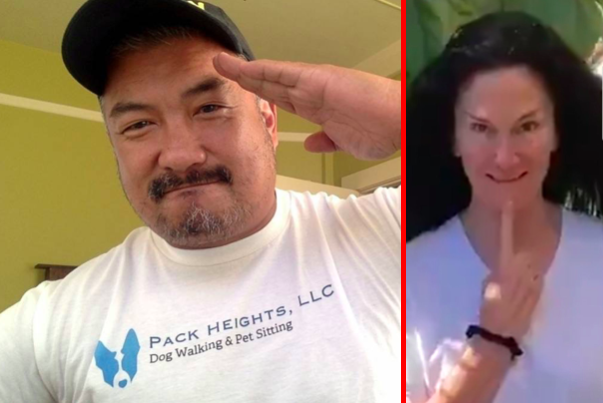 Another day, another white woman calling the cops on a person of color for absolutely no reason. This time is happened in the liberal enclave of San Francisco, California.

You’ve likely seen the video by now. A white woman by the name of Lisa, along with her husband Robert, threaten to call the cops on a guy for stenciling “Black Lives Matter” on the outside wall… of his own home.

The video was uploaded to Twitter last week, where it has since been viewed over 17 million times.

The women turned out to be Lisa Alexander, the CEO of a skincare line called Laface Skincare, and her husband Robert Larkins, who works in finance. The person they were threatening was Jaime Juanillo, a Filipino man who has lived on the property with his husband for the past 18 years.

A white couple call the police on me, a person of color, for stencilling a #BLM chalk message on my own front retaining wall. “Karen” lies and says she knows that I don’t live in my own house, because she knows the person who lives here. #blacklivesmatter pic.twitter.com/rOpHvKVwgP

In an interview with KQED, Juanillo says, “If enough people see incidents like this, then maybe people will actually think about it and change their behavior.”

“She kind of said this very clearly, placating, condescending, speaking-to-a-fifth-grader tone. And that’s what I responded to.”

“You can presume that she knew by calling the police that I could possibly die,” he continues. “She was OK with that. Even knowing that I was just working with chalk, she’s willing to call men with guns.”

“It’s not unusual at all for me to get a look like, ‘Do you belong here?’” he explains, though he notes many of his neighbors are very friendly towards him.

After the incident, Juanillo says Alexander and her husband walked by his house again. He tried getting their attention through the window. When they saw that he did, indeed, live there, they looked back in “total mortification” and ran away.

“They rode that racial bias all the way off a cliff,” Juanillo says.

After being doxed online, Alexander issued a statement saying she was “deeply sorry” for her “racist” actions. Her skincare line has been taken offline. And her accomplice/husband Robert was let go from his job at a wealth management firm.

Juanillo says that he never would have uploaded the video to Twitter had the couple just apologized after learning he really did live in his own house.