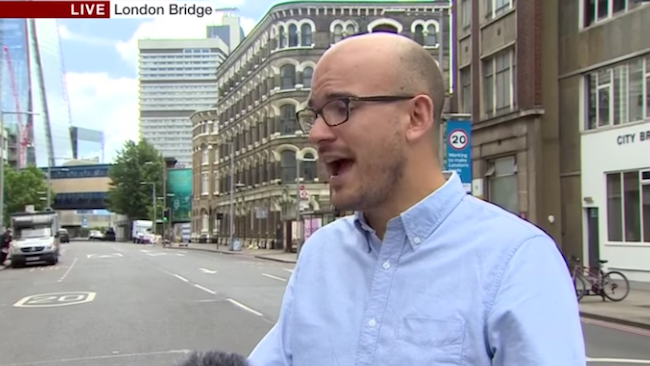 On Saturday June 3, shortly after 10 p.m., seven people were killed and over 48 injured in a terror attack in London.

Pedestrians were struck by a white van on London Bridge, followed by a quick succession of stabbings at Borough Market.

Three suspects were later shot and killed by police.

A man named Richard Angell happened to be at Borough Market during the second attack, and says he’s been working in London ever since leaving school.

Talking to the BBC on Sunday, he said: “I love this place,” praising the Manchester community for the solidarity it showed after the attack at an Ariana Grande concert last month.

He also claimed London Mayor Sadiq Khan “symbolizes that unity and diversity that we love about London.”

“We’re not going to let these people win,” he said. “If me having a gin and tonic with my friends, flirting with handsome men, hanging out with brilliant women, is what offends these people so much, I’m going to do it more not less.”

They hate our democracy, go vote people. They hate our equality, go meet somebody you haven’t met before from a different part of the world.

Small-minded, cowardly, evil people should not change our way of life.”

You can watch the entire speech here: