The attack happened the night of June 20. Police say that Seneca and White chatted for some time on Grindr before the pair set a time to meet. Seneca took White to a local residence where an argument ensued. He then proceeded to stab White in the neck. Seneca then called 9-1-1 to report that he had murdered White.

When police arrived on the scene, they found White in a bathtub with stab wounds to the neck, blunt force trauma to the head, and strangulation wounds. Seneca had also slashed White’s wrists, so deep, in fact, that he nearly cut off his hands. Police arrested Seneca and rushed White to a nearby hospital.

An investigation has already uncovered Seneca’s love of the serial killer Jeffrey Dahmer, who murdered and cannibalized 17 men and boys between 1978 and 1991. Seneca’s profile picture on Facebook is one of Dahmer, taken during his trial. 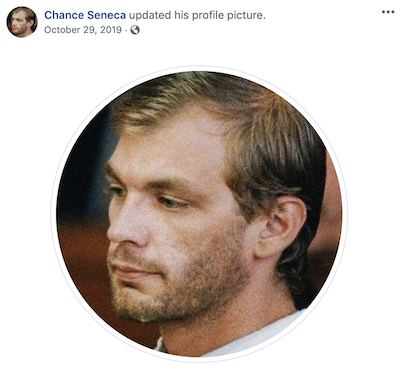 Still, despite the odd Dahmer parallels and the outcry from White’s friends & family, police have yet to charge Seneca with a hate crime.

Related: The full “My Friend Dahmer” trailer is here, and it’s a darkly delicious serving of total creepcakes

“There were several indicators that point us to the direction that it was not a hate crime,” Lafayette Police Sgt. Wayne Griffin told The Acadiana Advocate. “I know the mom has been posting on social media, and we’ve had all kinds of people calling the PD asking us to classify it as a hate crime. It’s just because of the sensitivity of the case, we cannot go into any more about it, but it’s not going to be classified as a hate crime.”

White’s family strongly disagrees. “In my opinion, this is nothing but something filled with hate,” White’s older sister, Faith Roussel told reporters. “I feel, just given who his profile picture was and the sick and evil things he did to my brother, this was absolutely a hate crime.” Roussel goes on to describe her brother as a activist member of the queer community, who had recently taken part in the anti-racist protests over the killing of George Floyd.

White remains in the ICU, though has recently been taken off a ventilator. Family members say he can respond to questions and has mobility but will still require extensive emotional and physical therapy to recover.