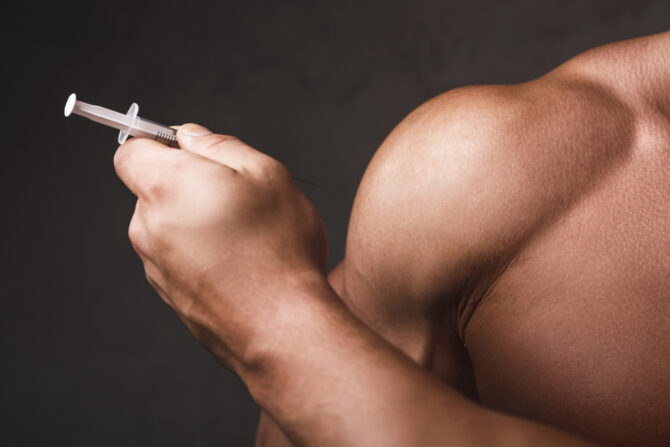 A Reddit user recently outed himself as a gay man who uses steroids, offering to answer any question other users in the r/askgaybros subreddit wanted to ask. And the side effects he describes may serve as a cautionary tale for others considering steroid use.

One commenter asked the obvious question: Why would the Redditor take steroids in the first place? “Body dysmorphia,” the Redditor explained. “I also have very poor genetics for building muscle and was not happy with my body even after six to seven years in the gym.”

Another commenter asked about two of the widely known side effects of steroids: shrinking of the testicles and severe acne.

“Yes and yes,” the Redditor replied. “I would say my testicles probably got 20-25% smaller. I got pretty bad acne on my shoulders and chest. Had to take a bunch of Accutane to get rid of it, which was miserable. The acne pretty much destroyed my mental state for about six months.”

Related: Study finds that steroid use is higher among gay and bi teen boys

And someone else posed a three-pronged question, asking the Redditor whether he intends to seek therapy for his dysmorphia, what he eats, and how the steroids have affected his sex life.

The Redditor answered all three questions: “1. I do not intend to seek therapy, as I’m not sure how much good it would do me,” he wrote. “2. My diet isn’t strict, but it’s not super bad either. A mix of Whole Foods with enough junk food to keep me sane. 3. I have noticed some differences with sex. First, my sex drive is much higher. Before steroids, I’d maybe masturbate or want sex four to five times in a week. Now two times a day is my average. I have also noticed that my orgasms seem more powerful on steroids. It’s sometimes difficult with my boyfriend because my sex drive is so much higher than his.”

Dr. Terry Dubrow of Botched fame told Queerty in 2015 how dangerous steroids can be. “Look, these are intensely scary, dangerous chemicals that are self-administered in extremely high doses without any real knowledge of side effects that are often irreversible,” the doc said. “Steroids have such strong potentially negative effects that in order to get super-ripped, you have to take them into the dose range where the side effects profile gets extraordinarily high and the dangers are really excessive. They can lead to kidney failure, thinning of the skin, propensity towards developing cancer, things that you literally die from. But these guys are taking whatever it takes to look amazing. And to really change your body with steroids, you have to hurt your hurt your organs. You have to. You can’t separate cosmetic improvements with organ derangement. It’s impossible to get shredded and huge with steroids without hurting yourself. Even if you cycle on and off, perfectly, the way bodybuilders do it, you’re going to pay the price. [Pause] That’s my speech. There you go.”