He speaks from raw, painful experiences while making his stories approachable and funny. He serves up life advice and gripes about the gay community without sounding preachy (except on vegetarianism). And at the heart of the album is his ongoing effort to reconcile his relationship with his mother, a woman who loves and supports her son but whose evangelical Christian beliefs reject his homosexuality.

As he explains near the beginning of the album, his mom would prefer that his comedy be free of blasphemy, sex, and swearing. “But there is no God and I like to fuck,” he jokes. In fact, because his album isn’t as clean as the title suggests, she refuses to even pay for it, let alone listen to it.

But Zach and his mom Patty agreed to speak to me about how his budding comedy career is nevertheless helping bring them back together and improve their relationship.

I opened the conversation by asking Patty about an essay Zach recently wrote about their relationship. In it, he attempted to make sense of the way that she doesn’t outright reject or celebrate him, but instead offers some “third, quantum, indescribable thing that is in the middle and both at once.” She confirmed that she had read it, which surprised Zach. “It was very good,” she assured him with her southern twang, easing his sudden concern about what kind of discussion might suddenly play out.

“I don’t reject him as a person in anything that he does, because I love him wholeheartedly whatever he chooses to do in life,” Patty explained. “There’s things that are more or less ‘the gay lifestyle’ that I don’t approve of. If that’s what makes him happy and he’s happy in that lifestyle, then I’m happy for him. Even though I don’t approve of it, as a mother I love him unconditionally.”

“I am a Christian, and God loves me unconditionally. He died for me. I do crazy stuff sometimes, and everything that is not of faith is sin, and there are things that I do that are not of faith, but He loves me anyway, and that’s my love for Zach and for all my kids.” 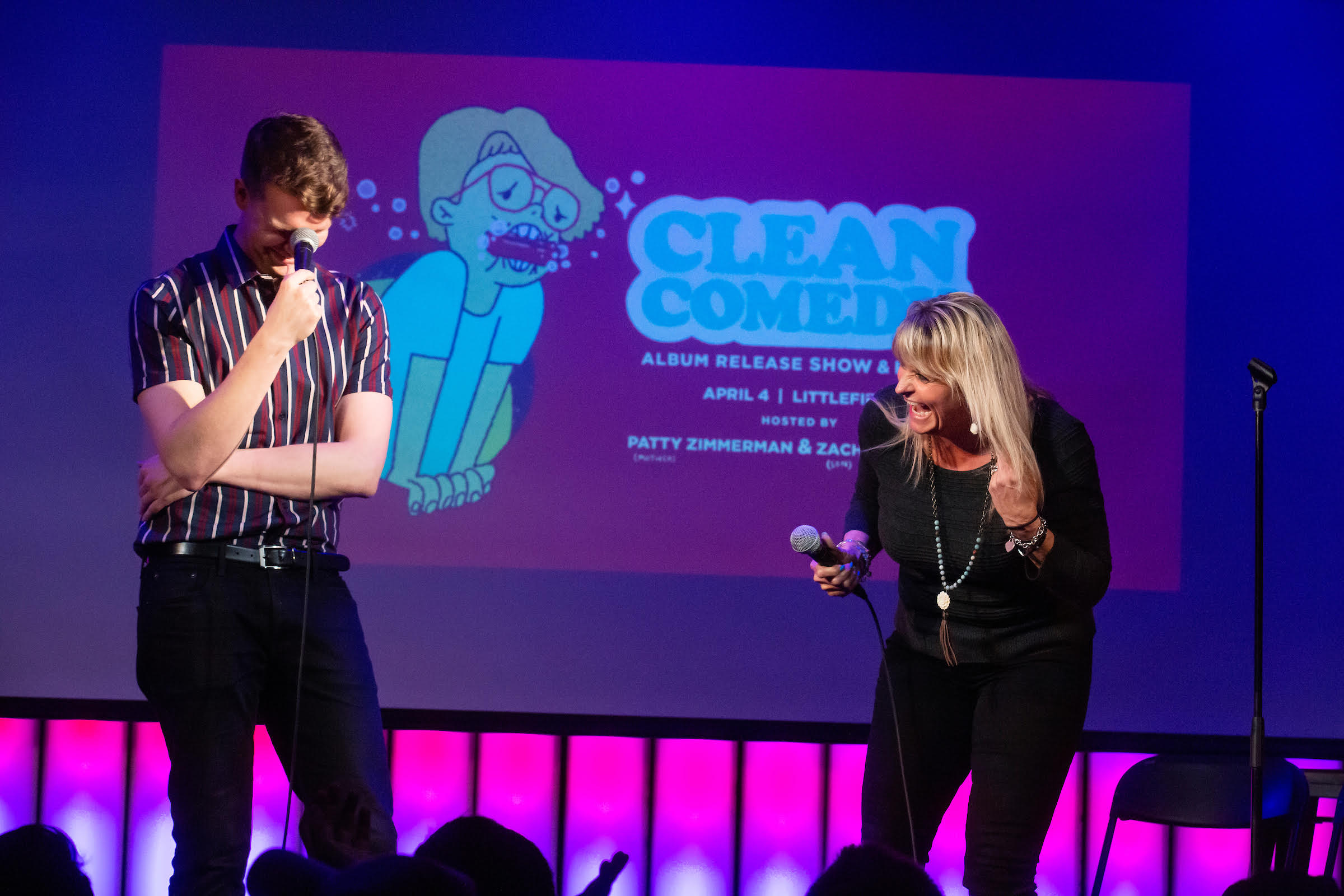 As Zach told me separately, it was a long journey to even get to this point. “I thought I was going to Hell for the first 20 years of my life,” he recalled about his life growing up in an evangelical family. “I didn’t entertain attraction to men until college.” Indeed, much of his journey through young adulthood was about separating out what he thought he should be doing with his life from what would actually bring it meaning.

A first-generation college student fresh out of Princeton, Zach took up a telemarketing gig for a theatre. He thinks of it as his “first form of crowd work,” except he was selling tickets instead of laughs. He also worked at Chicago’s LGBTQ center, where he saw queer people of all ages living out their lives, which helped him come out. Eventually, he found a job as an associate director of data and analytics for an ad agency in New York that he “didn’t care about at all.” He had a financial safety net, but it came at too high a price. Having taken some improv classes, he knew he enjoyed comedy, but he was “building a version of my life where comedy didn’t work.”

Now, instead of working on branding campaigns like some sort of gay Don Draper, Zach’s building his own comedy career. It seems to be working; Clean Comedy debuted at #1 on the iTunes comedy charts and also reached the Billboard Top 10 Comedy Albums. He’s also now one of the regular hosts of Scruff’s trivia game “Hosting,” helping the app’s users take home a little cash and learn some gay culture while they woof at their neighbors.

“Not having a safety net is powerful,” he realized. But having followed a traditional career path for the better part of a decade beyond college, he’s interested in using comedy to explore “how people wake up every morning and how they construct meaning in their lives.”

“If I had parents who were wealthy, I’d have been doing this at 22. But now [at 30] I’m more mature, and I’m not going to take this platform for granted.”

Building something on a foundation of maturity, however, has meant figuring out how to “love yourself,” a message he encourages on the album. “Only 1% of kids were so well-adjusted, and sheltered, and nurtured — and their ego was built in the perfect way by perfect parents — that they’re able to exist in the world where they truly love themselves,” he explained. “It’s painful when you realize you built a narrative of your life that has you being a piece of trash that doesn’t deserve love.” 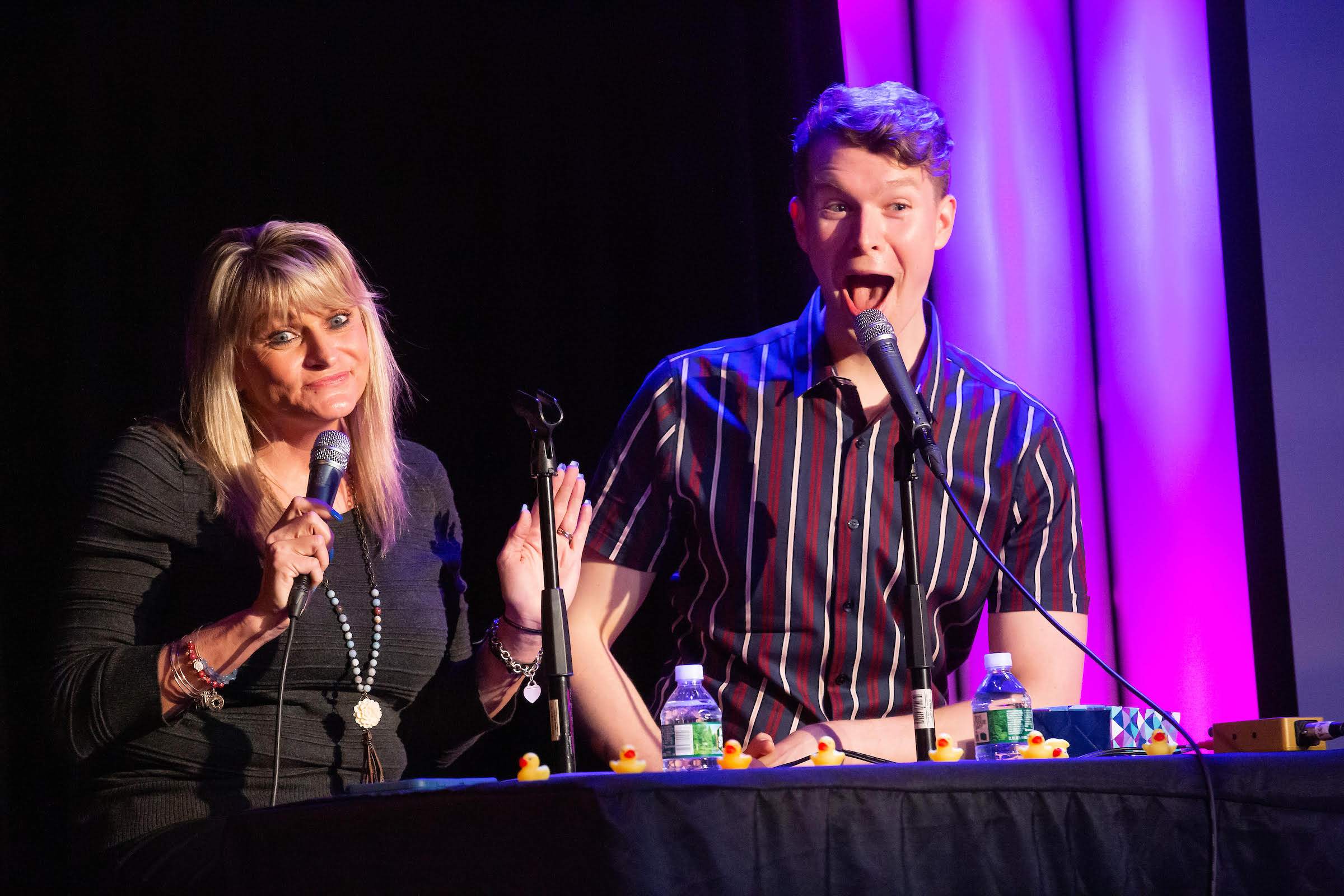 And even as he unashamedly uses comedy as a form of “rebellion against how I was raised,” he’s also trying to figure out how to build a relationship with his parents that’s also built on love, not rejection. It’s a process he describes as “ever-evolving” because of the way he increasingly comes to understand his own needs and expectations. “It’s so dumbfounding to hear, ‘I love you unconditionally but I believe marriage is between a man and a woman.’ ‘I love you but I’ll vote in a way you can’t marry a man.’ That’s a fascinating tension.”

It’s a tension that extends to how they discuss his career. “I’ll call him out if I see something bad on his Instagram,” Patty admitted. “I’ll screenshot it, circle it, send him a little text, send him a little Bible verse, send him a few things. He’s respectful, except when he sends me back something that says, ‘Unsubscribe.’” Zach wishes she would focus a little bit more on congratulating him on his career milestones than calling out what she views as his infractions.

Recently, Zach invited Patty up from western Virginia to enter his comedy world so that he could try to merge his past and present. Not only did she stay on his couch in New York City for three days, but he also set up a “clean comedy” show where he and his friends would perform while Patty sat on stage with a buzzer that she could use every time she thought their content was getting too dirty. “She got to see me thriving in this queer comedy scene, and I got to show her where I’ve lived for two years,” he said, describing it as a “three-day panic attack” that nevertheless resulted in progress for their relationship.

Patty thought the show was going to be “a trap,” with the other comedians being as raunchy and filthy as possible, but she ended up having a great time. She even danced with a drag queen. But she felt the event served as a testament to her belief that her son doesn’t have to be a “dirty comedian” to be successful. “I think I proved that to Zachary when I was there. I can have fun! That’s me, Mama Patty.”

“You said you think you’re funnier than me,” Zach chimed in.

Related: This Mother’s Speech About Her 6-Year-Old Trans Daughter Will Make You Cry

“I give him good content,” she boasted. “I give him a lot of good content.” Indeed, Zach riffs at length about his mom, including her storied career at Red Lobster, such as one story about how she got revenge on some customers who didn’t tip. She’s a little worried he’s shared too many specifics about her, because if she gets fired, it will interrupt her plans to write a post-retirement book called, “Things I Said You Could Have Fired Me For But Now You Can’t.”

It’s clear that the work they’re putting into their relationship is having an effect on her too. When Zach asked in jest if he’s still her favorite kid, she replied that her answer was what she called a “closet quote.” I took that as my cue to keep the answer off the record, but we all laughed at how she had appropriated gay terminology for her own usage.

Both told me that they think their relationship is likely better off than other families’ because of the amount of effort they have to put into maintaining it. The struggle results in a relationship that is more loving, more open, and more constructive than other mother-son relationships that people may take for granted. But it’s also a journey that’s hardly over.

On the album, Zach tees up the question of whether his parents would someday attend his wedding, and at the end of our group interview, I took the chance of asking Patty directly — which caught both of them off guard.

“Well that’s a bridge we have to cross when the time comes,” she said. “Is that fair?”

“You better be there,” Zach insisted.

As Zach pressed a bit more, she admitted she wouldn’t let it burn their relationship, but she explained it was just a question she had never thought about before — and wasn’t done thinking about.

“Well, there will be a seat for you,” Zach replied. Diffusing the tension, he added, “But I don’t know if anybody’s going to put up with me; that’s the bigger question.”

Even if it’s still a work in progress, it’s not lost on Patty that the work she and Zach are putting into their relationship could be a model for other families. Before we ended the call, she remarked, “Personally, I feel if I can impact just one person in this world — even if it’s just my kid — then it’s all worth it.”

If Zach’s thoughtfulness and humor — dirty or otherwise — is any indication, she has nothing to worry about.

Zack Ford is a reporter at ThinkProgress.org, where he has covered LGBTQ politics and the Trump administration. You can follow him on Twitter @ZackFord.