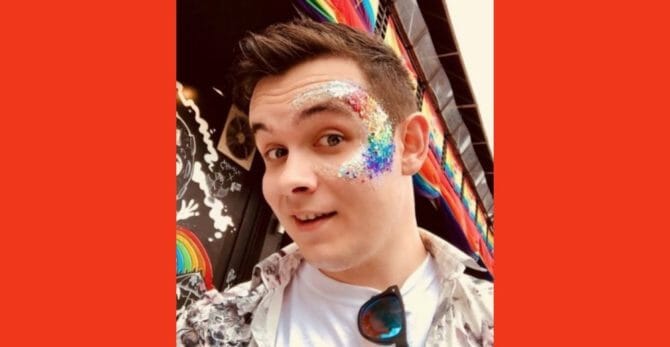 It was an all too familiar scene: A gay man was walking along, minding his own business when a car drove by and someone inside called out “fa**ot!!”

Nick Hurley, 27, was headed home in Manchester, UK after a shopping trip. Specifically, a pre-Brighton Pride glitter shopping trip (the biodegradable kind). Inside Hurley’s bag were small tubes of the shiny specks, which are fun when handled with care but a nightmare if spilled.

As the Manchester Evening News reports, Hurley exacted sweet revenge when the car stopped at a traffic light.

Through an open window, Hurley emptied a tube of glitter into the car, “horrifying” the two men inside before they sped away.

He shared the story on Twitter, where it quickly went viral:

If you think it’s okay to shout “faggot” at me out of your car window while you drive past, then I think it’s okay for me to empty a tube of glitter through that window when you stop at the traffic lights.

Your casual homophobia has supergay consequences. ??

Related: This adorable photo of a gay couple kissing is making homophobes lose their minds

“In a moment of creative frenzy I realised I had a bag full of glitter. I opened one tube and reached inside the window.

I thought ‘this might be a bad thing to do’ and launched the tube of glitter in the passenger window.

The traffic lights changed and the guys in the car looked flummoxed, as if to say ‘did that really happen?’

I have had death threats, a glass bottle thrown at me, a brick thrown at my house, all of these things have happened in Manchester.”

So this went a bit crazy. I don’t have anything to promote or sell, so while you’re here, why not drop a donation to @stonewalluk?

Hurley used his sudden online exposure to urge people to donate to the Stonewall charity.

“Out of that terrible thing that happened something nice and positive has come out of it. People have been sharing screenshots of donations,” he added.

You can read more of his account in a blog post he wrote about the incident on Medium.