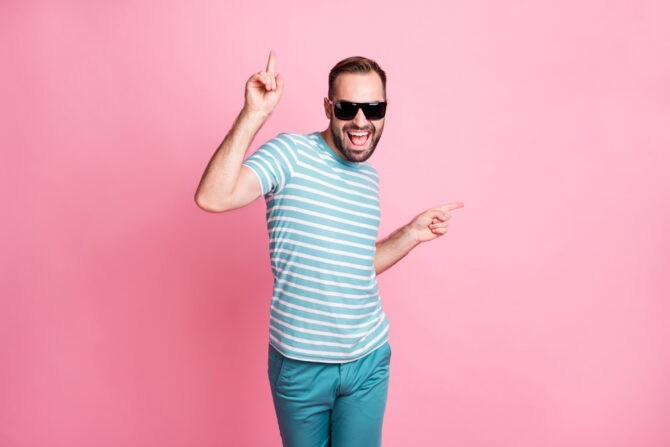 So you want to go out on the night on the town, but you don’t have a wingman or a posse to join you? Join the (proverbial) club!

On Reddit’s r/AskGayMen forum, one person asked if it was weird to go to a gay nightclub alone. “All my friends are straight and in relationships, so I rarely get an opportunity for a night out, let alone to a gay club,” that person explained. “I’m also a bit of an introvert and don’t want to seem like a weirdo/loner. Any tips?”

Turns out, tons of guys could relate—or, at least, could dispense sage advice to this would-be clubber.

“Go with no expectations,” one commenter advised. “Go with the intention to stand at the bar and have a few drinks and see what happens.”

Related: 11 types of gay bars and why they matter more than ever

Another person recommended sticking around the bar or chatting with other people in the restroom line. “Look approachable, as in, make occasional eye contact with people and soften your expression (if your discomfort shows on your face like mine can),” that commenter added. “And secondly, remember the world is your oyster. You can walk in and walk out as soon as you are ready to go.”

A third commenter suggested that solo nights out could be an excuse to try out another persona: “You’re usually a little shy? Well, if you’re not there with anyone, then no one’s expecting you to behave any particular way. You can push yourself to be bolder than usual about approaching people and being outgoing.”

And speaking of personas, one commenter advised being the friend that you want to have: “If your brain tells you to avoid dancing because you’re focusing on yourself, think about what that super-friendly party friend would do. They likely wouldn’t care and [would] just be there to have fun and not take it so seriously. Looking silly is a joke everyone is in on, to them.”

Farther down in the comments, one Redditor recalled going to a club with a friend who spent the whole night looking for a hookup. “I had enough money to buy two courage elixirs (vodka shots) and just went to the dance floor,” that person wrote. “I danced [for] like, four hours straight and then left. Honestly, best night of my life.”

And another Redditor said they finally went to a club alone last summer for the first time in their decade-long club-going experience. “And it’s my new favorite thing. What’s the point of waiting for other people to join you when you can have the entire night out on your own terms? If you’re embarrassed to be alone… don’t be. It’s loud and dark in there. Everybody’s drinking. Nobody knows or cares which friend group you walked in with. Order a drink and head to the dance floor.”