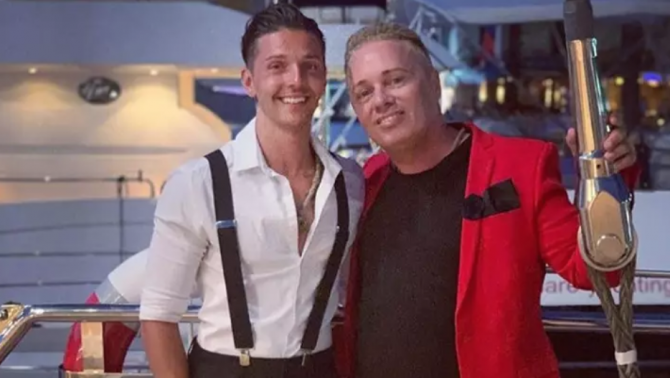 The family saga of the Drewitt-Barlows grows ever more complicated.

Britain’s highly publicized “first gay dads”, Barrie Drewitt-Barlow and Tony Drewitt-Barlow, divorced after 32 years of marriage last year. Then Tony started dating Scott Hutchinson, 25, and the two announced they were expecting a child through a surrogate. Tony happens to be an ex-boyfriend of Saffron Drewitt-Barlow, daughter of Barrie and Tony. Great, we’re all caught up!

Over the weekend, Barrie confirmed on Instagram he’d popped the question to Scott, and now the two plan to marry. The proposal came during a family vacation in Croatia, with a supportive Saffron in attendance.

Clearly not desiring any public attention during this private and intimate moment, Barrie posted a video of a boat deck covered in rose pedals and tea lights, asking viewers in a sing-songy tone “What’s happening here tonight? I wonder what it could be?” and finally resting the camera on a sizable diamond ring:

He also shared some family photos from the occasion:

And then reshared them just for emphasis:

Barrie and Tony Drewitt-Barlow made international headlines in 1999 when they won the legal right to be named as parents to their new twins Saffron and Aspen. It was the first time a same-sex couple appeared as official co-parents in the UK and opened the door for other queer parents.

They later had three more kids and moved to Florida, where the whole family–including Scott and Tony–now live.

WATCH: Michael Henry really needs to discuss bisexuality with you