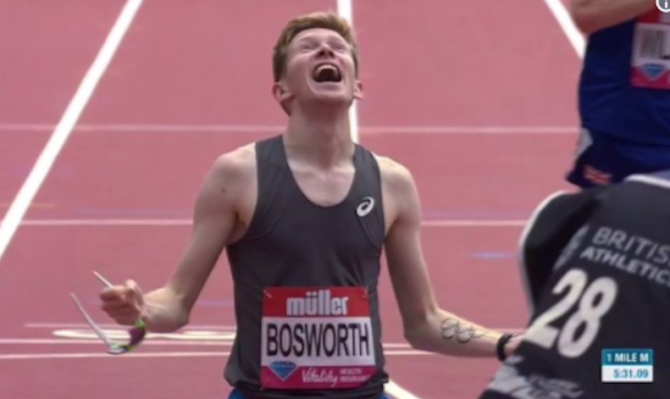 You did it on your way to the contact solution this morning, after you locked your front door to head to work, and also in the middle of the night when you woke up and needed to pee.

But walking is no joke in the competitive circuit, and openly gay Olympian race walker Tom Bosworth has set a new world record for the one-mile race walk at the London Anniversary Games over the weekend, finishing at 5:31:08.

Is that good? It’s a great running mile time, so we’ll have to assume it’s a stellar walking mile time. Judging by his joyous expression crossing the finish line and the fact that he, you know, set a world record, we’ll say well done!

“I wanted to make today special because it’s the first race walk at a Diamond League,” Bosworth said after the race. “In an event like mine, which isn’t seen on TV too much and is quite often misunderstood a lot, I think today was a great advert for race walking.”

To mark this momentous occasion, Bosworth had but two word to say on Twitter: “Holy Sh*t!”

Fans — because race walking has fans — were equally on cloud 9:

Me and my daughter were there cheering you on absolutely amazing, the atmosphere was incredible well done

5:30 is a great mile time for a RUN. To WALK that quickly is incredible. Congratulations @TomBosworth

Was in the stands watching this, amazing to watch. Incredible sound in the stadium.

Bosworth came out as gay in October 2015, and has been a positive influence on queer athletes all across the world for always staying true to himself.

“All I want to do is give a positive message that you can succeed in sport whatever your background,” he said back in ’15. “Be it gay, straight, black, white, religious or non-religious – there are no barriers.”

At the Rio Games in 2016, Bosworth proposed to his long-time boyfriend on the beach. He said yes!