Poof Doof is a popular gay circuit party in Melbourne that bills itself “a gay club for homos” and “Melbourne’s favorite gay rave.” It also hosts pop up events in other Australian cities, including Perth and Sydney.

Now, organizers are scrambling to do damage control after a damning internal document leaked on social media.

“Boys,” the document reads. “Poof Doof is a gay club for homos. No one here is to see girls. Ever.”

Another instruction says: “Boys with Muscles. Big Ones.”

And: “Drag Queens. But ONLY the BEST. And never more than 3-4. And once they’ve had their photo taken once, that’s it. Forever.” 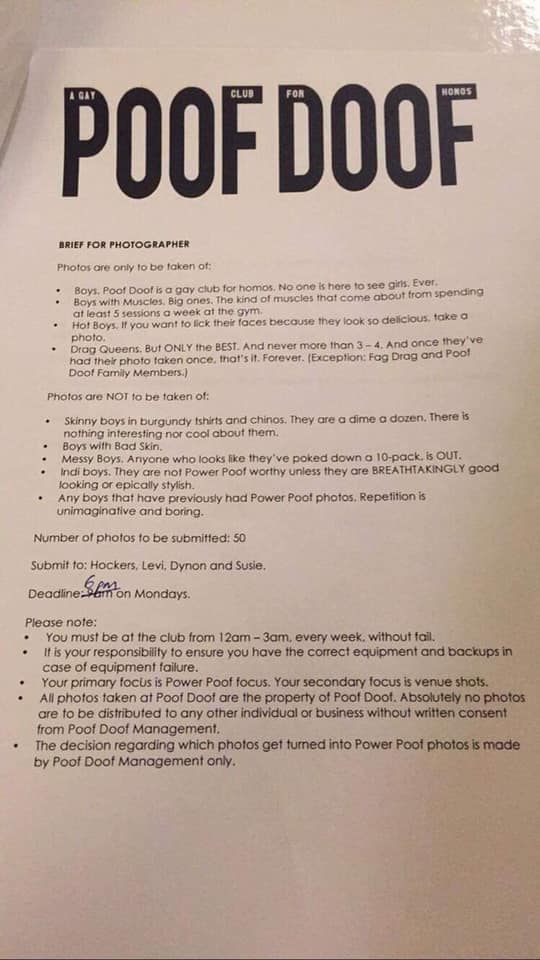 “We’re not shying away from the fact we did write, but it has been taken out of context,” she says. “It was written so long ago, it’s not something we circulate now.”

Related: Violet Chachki ‘physically dragged’ out of Paris sex club for being too femme

Robinson adds that organizers are “distressed” by the leak, but says “no brand is squeaky clean and perfect.”

“We have changed over the years,” she insists.

And while this may be true, a quick visit to Poof Doof’s Instagram page shows the vast majority of photos feature cisgender “boys with muscles”, a few drag queens, and hardly anyone else.

Robinson claims the document was leaked by an angry photographer who had recently been let go and was acting in “retaliation.”

She says Poof Doof has since updated its photography policy, though she could not confirm when the update happened or provide the new photography brief in writing, saying the instructions were all “verbal.”

Related: A gay club denied this hottie entry because he went out in high heels

“A verbal change of brief like, ‘you’re here at the club to take photos, take photos of everyone’,” she says.

To its credit, Poof Doof has taken to Facebook apologizing for the brief and asking people how it could become a more inclusive party.