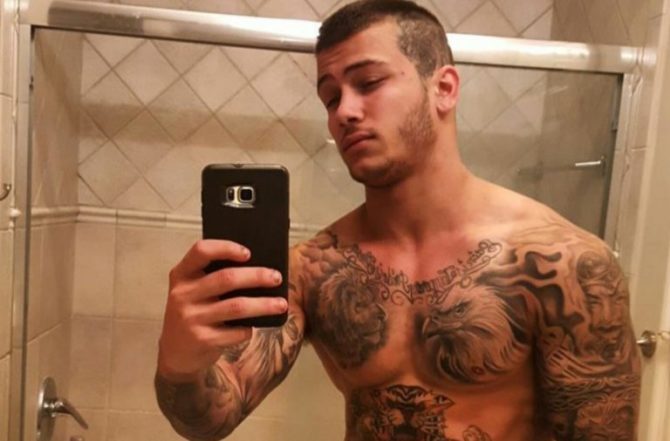 This just in: 25-year-old amateur gay-for-pay solo performer Michael Hoffman has officially come out of retirement.

Four years ago, Hoffman was at the top of his game. He was known as the young, hot, tatted-up bodybuilder who posted a series of videos to a number of pay-for-view gay sites and raked in tens of thousands of dollars.

The videos ranged from titillating to raunchy, and at least one featured Hoffman, who identifies as straight, alongside another guy.

Then last summer, Hoffman posted a video to his official Twitter page saying he was done selling his body on social media and that he regretted ever doing it in the first place.

“My decision four years ago to start making videos has really f*cked me up,” he said. “I lose girl after girl. I can’t land a relationship. Can’t get a job. Can’t go anywhere. Can’t do anything.”

“Every single person I meet finds out or knows about it, gets creeped out, doesn’t want to be f*cking friends with me.”

Well, it seems like he’s either moved on from those past feelings of regret, or he’s making the same mistakes all over again, because a new video featuring Hoffman and another man has started circulating online.

Related: Should having an x-rated past make a person ineligible for a job?

The video comes after Hoffman posted another video to his Twitter page last month saying he was mounting a comeback after taking a hiatus from social media.

“I know it’s been a good couple months,” he said. “I’ve been going through a lot. I was working. I thought I was gonna move on. But, honestly, I was just kinda missing this. And I was kinda missing all of you guys.”