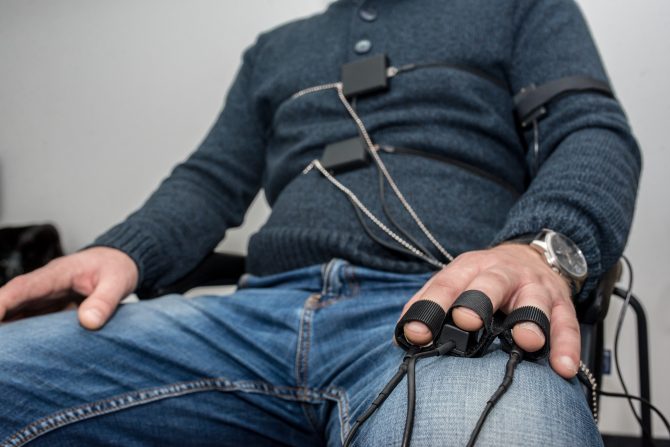 With cheating on the rise, more and more gay people are asking their partners to take lie detector tests. At least, according to Andrew Goldstein, a.k.a. “the Polygraph Examiner.”

Goldstein has specialized in confirming and/or debunking cases of infidelity for over a decade. He has administered thousands of polygraph tests since 2008.

Polygraph tests are the most accurate way to establish trust when anyone has been accused of cheating in their relationship. Polygraphs help establish a baseline of trust even when there was prior cheating admitted to in the past. For accuracy, Goldstein uses the same polygraph testing equipment that is used in murder cases. He only conducts polygraph examinations in accordance with procedures and protocols recognized by the American Polygraph Association and the American Association of Police Polygraphists.

About seven years ago, Goldstein started noticing an uptick in LGBTQ clientele. Speaking to qnotes, he remembers the first time a man came to his office and asked him to perform a lie detector test on his husband.

“What do you think your wife has done,” Goldstein recalls asking the man. To which, he replied, “No, it’s my husband.”

After that, Goldstein altered his preliminary questioning to be more inclusive of same-sex couples. As soon as he did, he saw a flood of LGBTQ clients wanting to know the truth about their significant others.

“I’ve noticed a lot more individuals being forthcoming about their being in a same-sex relationship or marriage,” Goldstein reflects. “Which I feel is a result of the LGBTQ community growing and becoming stronger as well as society as whole becoming more accepting.”

Goldstein also credits the rise of gay hookup apps for the surge in new clients, as cheating has become easier than ever.

“Most of the time when an individual confesses to one instance of infidelity, their spouse wants to know other information such as how many occurrences there have been,” he explains.

Sometimes unexpected revelations are made. Often during a session, Goldstein will witness a spouse confess to cheating after their partner has just been busted for infidelity.

“Let’s say I have a couple by the name of John and Mike where John is accusing Mike of cheating,” Goldstein explains. “So, I test Mike and he confesses to cheating one time. Then all of a sudden Mike says I want to know what John has done, and it turns out that John has also been cheating.”

With Valentine’s Day just around the corner, Goldstein says he’s about to get bombarded with new clients.

“During all holidays I see an increase in calls,” he explains, “but particularly around Valentine’s Day my phone calls increase tremendously.”

“I receive calls from every race, religion, creed, color and sexual orientation. We all have the same problems.”

Related: Is it OK to sleep with your cheating ex’s brother…. if he’s hot?