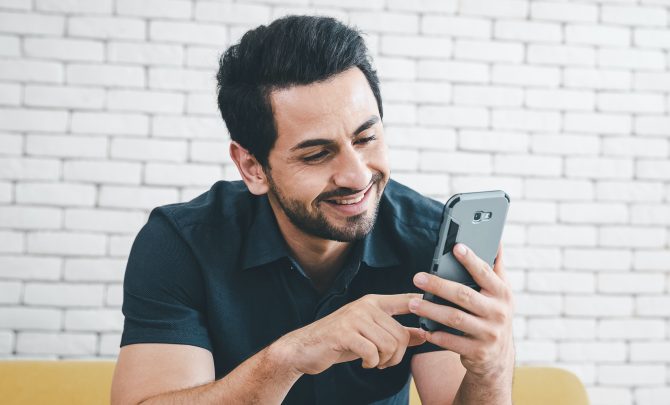 A sexy Grindr profile pic can do all the talking—especially with the dating app’s recently-relaxed nudity rules—but some users are looking for more than just thirst traps.

So what can you write to attract someone with your profile?

Guy guys revealed what kinds of words get their Grindr gears in motion in a recent Reddit thread after one person asked, “When browsing Grindr, besides aesthetics, what prompts you to interact with other members?”

Here’s a sampling of responses, edited for clarity:

“Guys who say hello or say something interesting instead of immediately sending a picture of their d*ck and assh*le unsolicited, even when my profile says to not do that.”

“Honestly, it’s one of two things: They’d f*ck me like a nasty slut, or they seem super-chill and down to earth without expectations.”

“If their profile says anything at all about themselves. Sincerity goes very far, and conversations need a place to start.”

“I can’t resist contradictory messaging. Like if you’re a ‘top’ but you have 15 pictures of your ass in varying positions, that’s gonna elicit a response (or interrogation is more what it’s like) from me. Or perhaps you’ve got a seemingly vanilla set of pictures but talk about all manner of kinky sh*t in your profile, I’ll take that bait. Also, actually saying something in your profile helps. Those ‘deleting soon’ and ‘lost chats’ and ‘bored’ assholes can get f*cked (with someone else’s d*ck).”

“A friendly, non-prudish profile gets my attention. 1. There’s nothing that turns me off faster than angry desperate profiles. Like, I promise you, no one gives a f*ck about how frustrated you are that you can’t find that guy who matches all 28 of your long list of prerequisites. 2. Profiles of people who get offended over nudes or sending them… on a f*cking gay sex hookup app. Like bro, we all know why we’re here. No need to try and be a prude now. 3. Guys who have long specific lists of what they’re looking for. Like, WTF you think this is? Chipotle? 4. Racists as well as BBC fetishizers.”

“Any combination of the following pique my interest: having a filled out profile, a link to social media (not private), and something that shows themselves as a person in addition to sex. It’s a lot to ask for, I know.”

“From how dead my city is, as long as they’re under 30 years old, I’ll interact with them, lmao.”

“Having a bio. I have kinks so when their bio says ‘dom top’ or lists some of my kinks; they’ll definitely get a message from me, haha. Also: foreign flags. I’m a sucker for foreign men and accents.”

“If their profile mentions watching movies or drinking, I’m down.”

“Pleasant social interaction, when the guy can chat and has a sense of humor. Extra points if he ends up dropping some goofy lines that he feels embarrassed about after.”

“A variety of things, but mentions of kink or a picture in a harness/leather/rubber/gear will almost certainly get a message.”

“It can vary. Sometimes, I get turned on by guys who are all about sex; other times, I get drawn in by conversation and their humor. Physical looks are important, but a guy’s personality is important, too.”

“I’ll talk to whomever as long as they have a picture. Whether I’m attracted to them or not is another story, lol. If that causes problems for some of you, I’m sorry about that. I do try to look for friends first before I end up hooking up with anybody.”