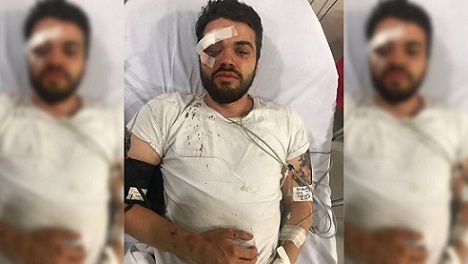 Early in the morning, a gay Argentinian rugby player was viciously beaten in an altercation his team says was a “brutal homophobic attack.”

Jonathan Castellari was out buying breakfast at 6 a.m. with a friend in Bueno Aires when seven men targeted him, allegedly calling him antigay slurs as they beat him.

Castellari was transported to a nearby hospital, having sustained a fractured eye.

A friend of Castellari posted photos of the aftermath:

“Today at 6am, a group attacked my friend to within an inch of his life, shouting ’Fa*got’ and ’Fucking fa*got,” the message reads in Spanish. “It came just days after we were celebrating Gay Pride. He doesn’t know how many stitches he will need and they need to operate after a fracture in some part of his eye. Everything hurts.”

Castellari’s rugby club, Argentina’s Ciervos Pampas, posted to Facebook with words of support for their injured player. They also called on police to label the attack as a hate crime, noting it was “not the consequence of a fight but a brutal homophobic attack.”

The team has spoken out against LGBT discrimination in the past.

Just last month, we reported that the festivities at Buenos Aires Pride were marred by an outburst of violence when three men — one carrying a hockey stick — attacked an attendee.