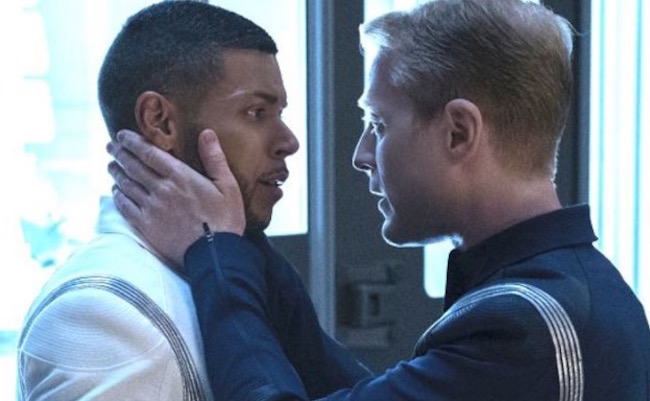 [This post features a major spoiler about Star Trek: Discovery, so maybe don’t read this if that’s the kind of thing that you find extremely upsetting.]

Fans of Star Trek: Discovery were in mourning/catatonia Monday morning after the show appeared to kill off one of its gay characters, Dr. Hugh Culber (portrayed by Wilson Cruz._

The character made headlines in 2017 since he happened to be in a happily committed relationship in outer space with Lt. Paul Stammets (Anthony Rapp).

But it looks like that gay relationship has hit a snag, since Culber was killed off by Lt. Ash Tayler (Shazad Latif), who Culber discovered was, in fact, a Klingon sleeper agent — a revelation that caused his neck to get snapped.

“We knew that this was going to be shocking for an audience and for a community that has unfortunately been assaulted by this ‘bury your gays’ trope,” showrunner Aaron Harberts tells  Entertainment Weekly.

“But I’m an openly gay showrunner and my writing partner is nothing if not the most supportive person when it comes to LGBT portrayals on TV.”

“We thought it was going to take a little while for the audience to bond with them, get to know the characters. We didn’t realize how this couple was going to resonate with audience, and they bonded so so quickly. Our intention was to really start their story with what happens tonight.”

For example, Emma is mad about it all. She wants everyone to “do better,” including you:

ok, fuck star trek discovery for killing off Culber, its first gay MoC. I don’t care if it turns out it was all just a ruse and ‘he’s still alive guys, don’t worry!’ GAY CHARACTERS DO NOT NEED TO SUFFER ANY MORE THAN THEY ALREADY HAVE. DO BETTER.

Kristen is jolly, jolly cross as well. She thinks the murder is “violent to our community.”

Thanks guys, you’ve just killed off a gay character. Way to go. *Slow hand clap* You’ve just joined the ranks of so many shows on TV that have done the same. It’s not original. Its a trope. It’s violent to our community. I expect better of Star Trek. #disappointed #discovery

Meanwhile, Jeff went ahead and did something pretty extremo: He canceled his CBS All-Access subscription because he thinks it’s inappropriate to kill off fictional characters who are in “happy gay relationships”:

I canceled my CBS All-Access that I had solely for Star Trek: Discovery. It's 2018, and killing off only women and men of color and killing of happy gay relationships is so common everywhere else and I don't need to pay for more of it

Cruz commented about the entirely pretend death of a wholly fictitious character to CBS News:

“What I’m really proud of — we learned some big things about Hugh in this episode. We see some of his genius —bedside manner—and we see him stand up to his superiors. We see things we haven’t seen and give people a preview of what’s to come.”

What’s to come? Well, Cruz promises his character is coming back like Jesus. Maybe he’ll be cloned. Maybe he has an evil brother who’s also in a happily committed gay relationship. Maybe he has an extra neck in storage.

“I would be upset if I was watching,” he tells EW, “and I think we need to give people permission to be upset.”

“I’m nervous because we are all aware of this trope throughout television which we continue to see LGBT characters, characters of color, and women killed off in very dismissive ways, and I want people to know that this is not that,” he says. “This is a chapter of this epic love story of these two characters. And this is science fiction. This is Star Trek. There are many possibilities….

When [the arc of the Discovery series] was explained to me, I got really excited — so it’s different in that way, because I’ll be back.

What I can say is that I’ve been assured that this is a long, epic story, and I know where it’s going and I’m excited about telling that story. But in order for us to tell that story, this had to happen. We’re inviting people to go on this journey, and part of this journey is going to be magnificent and some of it is going to be disappointing. There is going to be glory and triumph and heartbreak, but we will come out of it at the other end better for it, I promise you. So go on the ride with us.”

Subscribe to Queerty for a daily dose of #entertainment #anthonyrapp #startrek:discovery stories and more