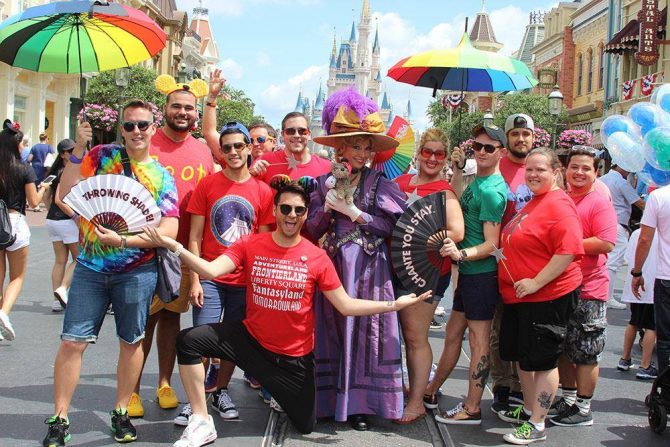 The incident was evidently very upsetting because the momzilla quickly took to Facebook to rant about why “people without children” should be “banned” from the park.

In her post, the woman said that millennials, specifically, “have NO idea the JOY and HAPPINESS it is to MOTHERS WHO BUYS THEIR BABIES TREATS AND TOYS,” nor will they ever “EXPERIENCE THE EXHAUSTION THAT IT IS TO CHASE A 3 YEAR OLD AROUND AND GETTING STARES AT ASSUMING I’M A BAD MOTHER.”

“YOU HAVE NO F*CKING IDEA WHAT ITS LIKE TO HAVE TO STAND IN LINE FOR 3 HOURS WITH A CRANKY TIRED EXHAUSTED TODDLER. DW is for CHILDREN!!!! People without CHILDREN need to be BANNED,” the momzilla ranted. 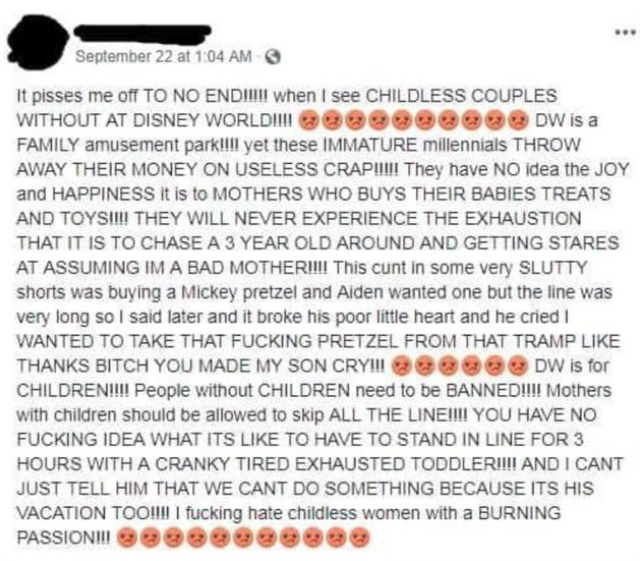 Naturally, her rant has inspired quite a bit of commentary from Gay Twitter™…

A white mom when she sees my childless gay ass at Disney World
pic.twitter.com/mMeizes2Uq

That Karen would lose it if she showed up to Disney World on Gay Days. ??????

We are taking our asses to Walt Disney world childless and gay next week haha so we Will enjoy it very much ? when are you going

The positive effect of the New York Post “childless millennials going to Disney World is weird” article is that every Twitter gay is becoming a Disney gay in this moment. #DisneyGayAgenda pic.twitter.com/Oy8F91xxPS

Disney world is for the gays! Get the children out!

I wish people would shut up about how others choose to have fun. Taking our gay, childless, middle aged asses to Disney World or Land and spending our money affects nothing. Be miserable in your line.

Another useless article going around talking about how adults going to Disney World is weird….. Disney gays RISE!!!!!!!!!!!!!! pic.twitter.com/hURLc3tDvD

Disney World is NOT for children. It is for ADULT, GAY MEN. https://t.co/e5hBIn38re

I’m going to Disneyworld #childless in some #slutshorts with all of my gay childless millennial friends! #mickeypretzel

Why so this even trending? Anyone…..gay, trans, childless, or with as many kids as they have are welcome to go to Disneyworld and Disneyland. This is a dumb tending topic. pic.twitter.com/K01kAvzUvb