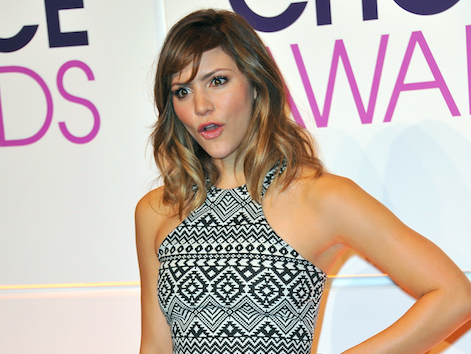 It’s safe to say that American Idol alum Katharine McPhee would not have a career today if it weren’t for her loyal LGBTQ fanbase. Now, it looks as though that career may be in jeopardy. And it’s all because of… $500.

McPhee’s Twitter page is filled with shout outs and references to her gay fans and gay culture, as well re-tweets by other people in support of LGBTQ people.

I had David watch Drag Race for the first time last night and we couldn’t stop obsessing over @BlairStClair (rooting for you and sending good luck your way!) ? #AllStars5

Trans women and men are beautiful. Don’t let anybody tell you your existence isn’t valid. Happy Pride month to you and anybody else who identifies as LGBTQ. I love you all! ???

Excited to announce I'll be a part of this year's @aidswalkny LIVE! at home with this incredible line up to benefit @GMHC and their COVID-19 efforts, streaming on July 19th. ?? pic.twitter.com/ORpMmN60yG

She also likes to refer to her LGBTQ fans by the pet name “my gay boys.”

In 2018, McPhee recorded a video specifically for “my gay boys” before her Broadway debut in Waitress, promising to give them “everything you ever dreamed of.”

The rumors are true – yes, I am going to give the gays everything they want. #KatOnBroadway pic.twitter.com/j9zWSTlNvB

Also in 2018, McPhee published a “love letter” to her LGBTQ fans in Billboard, in which she wrote: “I’d like to express my unwavering support to the LGBTQ community and appreciation for how much love you’ve shown me throughout the years.”

She added, “I have always felt you right by my side, you’ve kept me going and stood by me every second, and for that I am grateful.”

Which is why it is so incredibly strange that she appears to have made two separate $250 donations to the National Republican Senatorial Committee, or NRSC, a group that is working to maintain the GOP’s majority in the Senate so that they can continue doing stuff like, say, chip away at LGBTQ rights.

Jezebel broke the story over the weekend. According to Federal Election Commission records, a self-employed singer by the name of Katharine McPhee who lives in Los Angeles donated a total of $500 to the NRSC earlier this year.

When asked for comment, McPhee’s publicist didn’t respond, and the singer hasn’t mentioned anything about the donations on social media.

Perhaps she’s hoping that if she doesn’t say anything the story will disappear?

Unfortunately for her, when you’re entire fan base is made up of gay people, it’s kinda hard to avoid talking about why you (or someone with your exact name and career and who lives in the same city as you) gave money to a political party that’s actively working against LGBTQ equality.

Katharine Mcphee is a republican. Bye, my gay boys!

The funniest part about Katharine McPhee being a republican is that her whole fan base is gay, so she will get dragged so hard her hair follicles will dissipate. pic.twitter.com/q9ro39lONX

okay, now that we know Katharine McPhee is a republican, which one of you New York/LA media gays is gonna expose who does her social media?

Y’all are so surprised to learn that Katharine McPhee is a Republican as if you didn’t already know she’s a Karen. pic.twitter.com/XT8cSn5UOm

I edited Katharine McPhee’s wikipedia page to note that she’s a horrid republican but within minutes someone re-edited it to be even MORE scathing and I love that!

since katharine mcphee was outed as a republican i dont feel bad for saying this: was smash supposed to feel like a competition??? like meghan hilty was SOOOOO clearly the better marilyn, were we supposed to think katharine stood a chance?

Idk what’s worse, people upset that Katharine McPhee is a republican, or the fact that people even know who she is in 2020…

so katharine mcphee has donated to the republican party as pf this june. pic.twitter.com/AQAgyp1tFh

Katharine McPhee being so broke that she’s donating hundreds to the Republican Party ? pleaseee

i leave twitter for a day to walk up some hills and katharine mcphee gets outed as a republican? i’m so tired of this

katharine mcphee being a republican is literally the last thing i thought i’d have to deal with in 2020.

The whole thing is disappointing, to say the least.

Then again, is it really that surprising a woman who uses cringeworthy pet names like “my gay boys” to talk about gay men doesn’t really view them as equals?