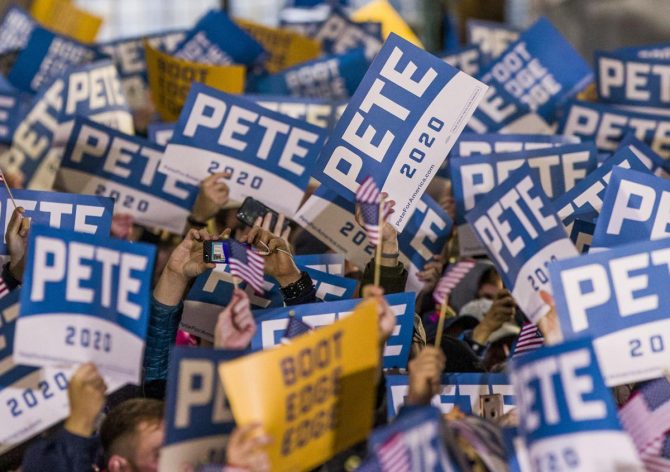 You’ve likely heard by now that Pete Buttigieg officially announced his candidacy for president during an impassioned speech in South Bend, Indiana on Sunday.

During his 36-minute ceremonial speech, the openly gay Mayor of South Bend talked about everything from the economy to intergenerational justice to climate change to equality for all.

.@PeteButtigieg: "My name is Pete Buttigieg. They call be Mayor Pete. I am a proud son of South Bend, Indiana and I am running for President of the United States." pic.twitter.com/YHPFnUy2ep

At the end of the speech, he and his husband Chasten Buttigieg shared a kiss and received a huge round of applause from the crowd, as well as from people on Twitter.

It was pretty damn historic.

This is a BFD.

It sends a message to every gay/queer kid in America that they can be out and proud, and achieve anything they want.

I’m still amazed I got to see this in my lifetime. pic.twitter.com/UULyUuDJH7

“My name is @PeteButtigieg. They call me Mayor Pete. I am a proud son of South Bend, Indiana. And I am running for President of the United States.”

Since delivering his announcement speech, Pete Buttigieg has raised more than $1 million from supporters, according to his communications adviser

Don’t know exactly why, but us Latinos love when when a non-Latino speaks Spanish. I think it has to do with community and pride for our culture. And we love Mayor Peter. Adelante, alcalde Pedro!!!

I look at this image and I just think about the number men and women before us who risked everything, including their lives, so @PeteButtigieg could have this moment with his amazing husband @Chas10Buttigieg . Harvey Milk would be so proud. ?????? #ProudHomo pic.twitter.com/DATYaxaEir

Surreal to see a gay man running for President with his husband by his side. If you told me this would be possible as a kid when I deeply hated who I was and would have done anything to change it I’d never have believed you. pic.twitter.com/jfnhq2s4hf

The amount of love and support I see @PeteButtigieg getting from not only the people in South Bend warms my heart. I don’t think we could as for a better candidate for president, I’m so proud and so HONOURED to be apart of this movement. #PeteForAmerica ???

Without Obama and Hillary, there’d be no @PeteButtigieg. I’m thinking a lot about that right now.

It’s not just the LGBTQ heroes that made this campaign possible— It’s anyone who challenged the norms of politics as we know it.

That’s intersectionality at its best.

I’m already seeing the negative takes, and today I’m letting them go without comment. Today an openly gay man officially announced his candidacy for President, was taken seriously and celebrated for it. I did not think I would see it this soon, if ever, and today I am happy.

We need @PeteButtigieg so that people can associate Indiana with someone infinitely better than Pence !!

We just watched an openly gay candidate for president kiss and embrace his husband in public!!

As a gay man, @PeteButtigieg & @Chas10Buttigieg display of their love to the world brings such a sense of happiness and pride to me. pic.twitter.com/mEanqUJ7JN

I love this photo of Pete Buttigieg and his husband Chasten Glezman. It sends a powerful message to every gay kid in the world that they can be anything they want to be, no matter what people tell them. pic.twitter.com/lkTq6Dsb3w

A candidate for the most powerful job in the world, proudly displaying the love for his husband. A message to every gay kid in America that they can be anything they want to be. Even president. pic.twitter.com/Z13TtQl8ZH

Pete Buttigieg: “Take it from Chasten and me, you’re not free if the county clerk gets to tell you who you ought to marry because of their idea, their political beliefs” pic.twitter.com/6tmaWLwIb9

Happy @PeteButtigieg Day! The First Openly Gay Man Announcing His Run To Become President of The United States. #HarveyMilk had hope that this day would arrive. And here we are. #LGBTHistory #Pete202 Our Story Changes Today. ???????????? pic.twitter.com/40sfoXfr4e

Related: Mayor Pete kissed his husband after he announced his campaign & it brought LGBTQ people to tears