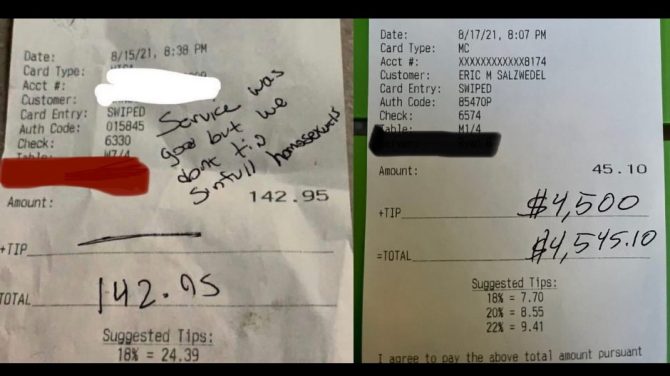 Hundreds of people pitched in to surprise a server from Wisconsin with a $4,500 tip after they received a homophobic note from a nasty customer.

On Monday, Eric Salzwedel started the #VenmoChallenge after he said his friend, who works as a server at a restaurant in downtown Madison, was stiffed by a homophobic customer.

A receipt showed that on the $142 bill, rather than leave a tip, the customer wrote, “Service was good but we don’t tip sinful homosexuals.”

“This really upset me that someone would do something like this,” Salzwedel tells local media. “To go to the extent of saying it was good service, but because of their sexual orientation, they decided not to give them a tip.”

Salzwedel shared a picture of the receipt on Facebook asking for donations so he could surprise his friend with the tip they deserved.

“Seeing this receipt, I immediately wanted to do another #VenmoChallenge, specifically for the reason to show there is more love than hate in this world and to life their spirits,” Salzwedel says.

“On Tuesday evening we were able to surprise the server with the tip and to let them know that people love them for who they are and to not listen to those who just want to spread hate onto others,” Salzwedel says. “As you may expect they were surprised from the tip and extremely grateful.”