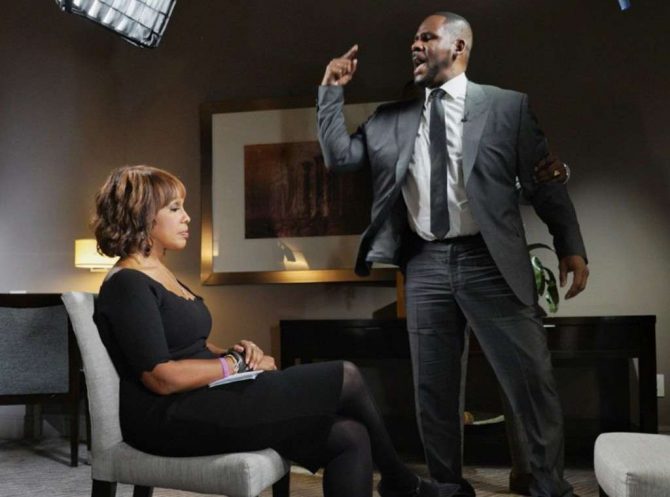 You’ve likely heard by now that mired R&B pop singer and accused rapist R. Kelly sat down with Gayle King for an interview this week and things didn’t go so well. In fact, they went pretty terribly.

Kelly invited King to his Chicago Trump Tower apartment to discuss the 10 counts of aggravated criminal sexual abuse against him. Only a few minutes in, he flew into a rage.

Speaking to Stephen Colbert last night, King said she knew she needed to stay calm if she wanted to interview to continue.

Related: R. Kelly goes off on Gayle King in unhinged rant that can’t be unseen

“I could see him getting more heated,” she recalled. “He was upset with me about some of the questions. That’s OK. He was a little irritated. That’s OK.”

Obviously, that’s not what happened. Instead of leaving, R. Kelly whipped into a frenzied rant, stomping his feet while shouting and crying and pointing angrily into the camera before eventually his publicist had to get involved.

Recalled King: “I thought if I just sit there quietly looking at him, he would know I’m not going anywhere and I’ll just wait for you to finish whatever this is and then you’ll sit back down in the seat and he did that.”

“I thought if we had both gotten emotional and amped up like that, what good would come of that?”

Ultimately, King explained, it was simply saying his name that ended up being the most soothing.

King says, while the interview made headlines this week, Kelly’s extreme unhinged reaction was definitely not the response she was hoping for.

“It became very troubling to me to see him really just fall apart,” she said. “I thought we were witnessing the self destruction of a man having a breakdown and that’s never a good thing to see—never.”

Subscribe to Queerty for a daily dose of #life #gayleking #r.kelly stories and more