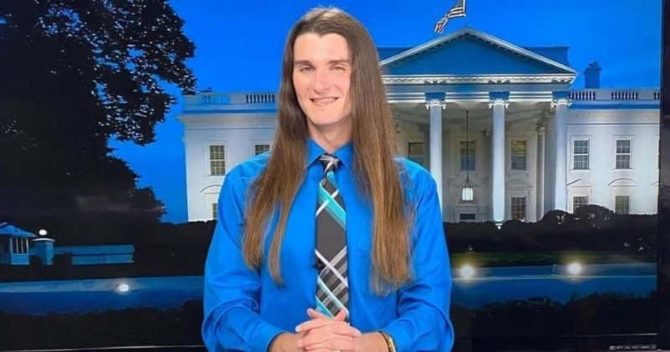 The award is presented to people “who have made monumental and lasting contributions to the cause of freedom worldwide.” Past recipients of the award include antigay pastor Billy Graham and Donald Trump‘s personal lawyer Rudy Giuliani. Oh, and Bob Hope!

Presler, who called the deadly insurrection on the U.S. Capitol earlier this year the “largest civil rights protest in American history” and who worked with the anti-Muslim hate group “ACT for America” from 2017-2018, took to Twitter to gloat about his award on Saturday.

“Just received the Ronald Reagan Award at @CPAC,” the 34-year-old tweeted. “This is the coolest gosh darn moment of my life. None of this would have been possible without you. Mom & dad are here at my table and I couldn’t be a more proud son.”

This is the coolest gosh darn moment of my life.

None of this would have been possible without you.

Mom & dad are here at my table and I couldn’t be a more proud son.

The irony that Presler, an openly gay man, was given an award named after a guy who ignored the cries of LGBTQ activists begging for help during the AIDS epidemic by a group that continues to actively work against equality is so thick it’s almost palpable.

I’m sure Reagan would have loved the idea of a homosexual man receive an award with his name on it.

I never liked Reagan. I can tell you this much though, he would have despised you and everything you do.

I’m going to guess they only give these out to the best Nazis, so congrats! Your mom and dad must be so proud! pic.twitter.com/gQcmIZUb2n

he’s involved with anti-Muslim hate groups, that should tell you all you need to know

My parents would never be proud of any of us becoming Nazis.

🙄 Ronald Reagan would not appreciate this award…

It’s like getting a Blockbuster Video Award. It will soon be obsolete

Ronald Reagan would not be standing on a nazi stage

Does he know that they are anti-gay?

These folks commenting on your post have no clue who Reagan was. Reagan and the AIDS epidemic should maybe give them a clue. Reagan is most likely rolling in his grave that this Scott Presley guy won an award in his name. 🤦‍♀️

Yeah a award at a white supremacy conference isn’t really something to be proud of.