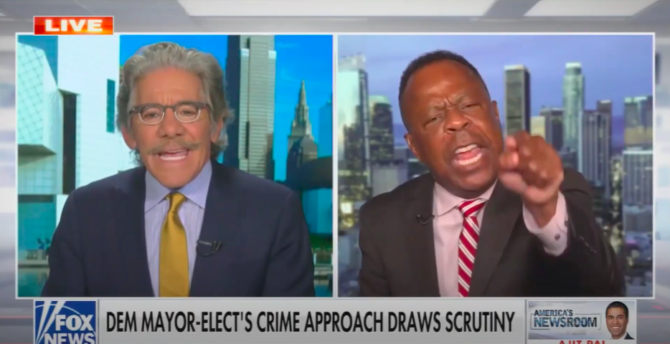 Geraldo Rivera was ripped to shreds this morning on Fox News after he asked Leo Terrell, a civil rights attorney and Fox News contributor, when he last visited the “ghetto.”

The question came during a heated conversation between Rivera, Terrell, and Fox News host Bill Hemmer about Tishaura Jones, the newly-elected, first Black mayor of St. Louis, and her plans to reduce crime and reform law enforcement.

“Hey, Leo, when was the last time you were in the ghetto?” Rivera pompously remarked during the exchange.

Quite understandably, Terrell did not appreciate the racist question.

“How dare you say that?” he responded. Then the two men proceeded to yell at one another until Hemmer eventually stepped in to bring things to a visibly-tense close.

But this isn’t the first time Rivera has made insulting remarks about Black people.

In addition to constantly defending Donald Trump‘s racism, in 2015 he said hip hop music had “done more damage to black and brown people than racism in the last 10 years.” And in 2012, he said 17-year-old Trayvon Martin was partially responsible for his own death because he was wearing a hoodie when George Zimmerman shot him.

Of course, Rivera is also no friend to the LGBTQ community either.

In 2013, he defended actor Alec Baldwin over his use of the antigay slur “c*cksucking f*ggot.” And in 2016, he said that if the victims of the Pulse massacre had only fought back harder maybe they wouldn’t have died.

Last summer, footage of an old episode of his ’90s talk show dedicated to “power d*kes” resurfaced, as well as a 1998 New York Magazine article in which he was quoted saying his favorite bar is “owned by three d*kes.” (This ended up being false, BTW, and the bar’s heterosexual owner was said to be “mystified” by Rivera’s comment.)

Geraldo Rivera asks Leo Terrell when's the last time he was in the "ghetto" and all hell breaks loose pic.twitter.com/ZdjadawLqM

Shortly after the segment aired and his name was trending on Twitter, Rivera apologized for his remarks.

“Apologize to @TheLeoTerrell did not mean to imply that he doesn’t get realities of urban life,” the 77-year tweeted. “Sorry Leo didn’t mean it personally. I wish St Louis’ new mayor the best. She has her hands full in a city beset by violent crime.”

Apologize to @TheLeoTerrell did not mean to imply that he doesn’t get realities of urban life. Sorry Leo didn’t mean it personally. I wish St Louis’ new mayor the best. She has her hands full in a city beset by violent crime.

Geraldo is still a dumb fuck, I see. ?

Only Fox News and their low IQ viewership would consider Geraldo relevant in any way, on any subject. I don't know of a more useless "journalist" in my lifetime.

Geraldo is trending.
Do not open this! pic.twitter.com/uiLafmamsu

I see @GeraldoRivera trending, and my first thought is, "Did he finally find the real vault of Al Capone?"

Geraldo Rivera groped Bette Midler — see how he fits in with Trump and the GOP?

I think we should stop treating Fox News like Real News.