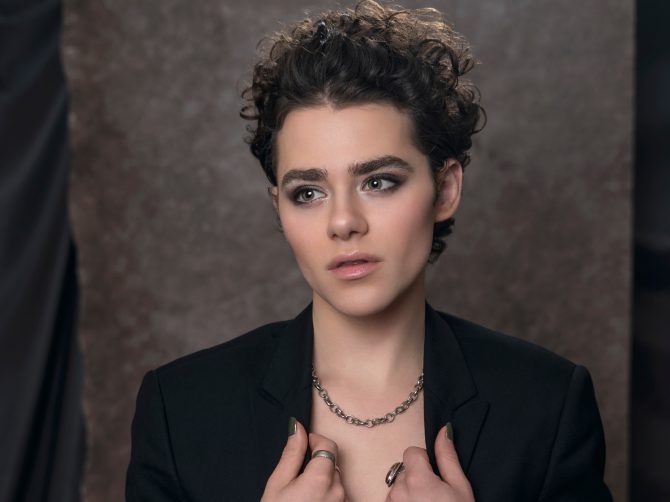 The openly queer, nonbinary actor (who prefers they/them pronouns) gets a leading role in the new Blumhouse/Universal horror-comedy Freaky. The film lands in theatres November 13 before coming to streaming December 4.

Freaky follows a perky high school blond named, Millie (Kathryn Newton). By chance, she crosses paths with a serial killer called the Blissfield Butcher (Vince Vaughn), and by an even stranger chance, switches bodies with him. Finding herself suddenly transformed into a middle-aged man, Millie enlists her friends Nyla (Celeste O’Connor) and Josh (Osherovich) to help break the magic spell before it becomes permanent, and before the Blissfield Butcher manages to start killing their classmates.

Originally from Washington D.C., Osherovich has seen their star rise over the past year, appearing in The Goldfinch alongside Nicole Kidman, Jeffery Wright and Sarah Paulson, and landed a recurring role in the TV series NOS4A2 on AMC.

Queerty scored some time with Osherovich to discuss the film, their career, and the effect of coming out as non-binary & queer. Freaky lands in theatres November 13 before coming to streaming December 4.

How did the film come to you?

I was auditioning a good amount at the time, and this was one of many things thrown at me last pilot season. I got the script, read it, and was like this is insane, but it kind of works. It ended up that I tested for this film with Chris Landon over Skype the same day I had another big casting for a TV show.

So I was quite distracted. I blew through the test with him just to make it to downtown New York for the other casting. But he asked me a couple really pointed questions: If you had this role, what would you do with it? I was like honestly, it seems like you’ve written a good, queer character that is able and drives the story forward. I would go one step further and make the guy human. And I got it. So yay.

I guess it was a good answer.

You mention you thought the script was crazy. What was it in the script, or the character of Josh, that you really connected with?

I always appreciate art that deals with relatively heavy social issues—whether that be gender identity, finding yourself as a teenager, queerness and blackness in a traditionally white-run space—but that deals with them in a funny not beat-you-over-the-head kind of way. I think that’s really important, however you’re going to get a social message out there. I realized early on that Chris Landon and co-writer Michael Kennedy kind of wanted to see their queer superhero they never had growing up, or a black character with serious agency like Celeste plays in the film. And it reads. I didn’t need much explaining to realize that’s what they were doing. I appreciate that a lot.

One element that’s key to the film is the trio relationship of Josh, Millie, and Nyla. How do you go about building that in real life with Kayhrn & Celeste—and Vince, too—to show that camaraderie?

We did a good amount of rehearsals with Chris, which were always incredibly casual. It was sitting around the table, reading a scene, and just talking about a sh*t ton of backstory: what kind of kids these are, what they do in their free time. It wasn’t anything that nerdy or academic. It was very much an environment that Chris created. Chris also made a point to take the cast out to dinner and get us to know everybody—the producers, the crew. Chris is very vocal about wanting to have fun at work. That involves being really comfortable with each other. I think that’s a lot of how we did that. Then Celeste and I have a lot of “duo” action in the film. We hung out at the hotel, getting to know each other personally. We’re still really good friends. So it was a lot of just getting to know the other human.

So then the logical follow up here: Vince Vaughn is actually playing Millie through a good chunk of the film. How do you keep that friendship dynamic carrying over to those scenes? Vince is obviously older and quite different physically from Kathryn.

Oh yes. He’s a full foot and two inches taller than me.

Related: Being bisexual+ & nonbinary while rejecting the gender binary

I’m also a small human. Here’s the thing: the rehearsals with Chris were especially key because we actually did them in a quad—the four of us. So Kathryn and Vince had their own rehearsals to build physicality and mannerisms and mirror each other. And Vince was often driving these discussions in rehearsal: ok Kathryn, what does Millie do with her friends at sleepovers? I think Vince’s superpower is that he’s impossibly curious.

Truly. If you’re going to stand next to him on set, be prepared for him to ask a sh*t ton of questions and actually hear your answers for a very long time. So caffeinate. But it was very much about building us as a foursome to make it work.

Fantastic. The gay best friend is a trope we’ve seen in films, though not quite done this way before. I mean that in the sense that Josh is more than comic relief or a victim, he’s a hero. What were your conversations with Christopher Landon, who directed and co-wrote like?

Chris is very receptive, as was our co-writer Michael Kennedy. I don’t think it should go unnoted that they worked hand in hand on the script. The character of Josh actually comes from Michael’s queer superhero that he wanted to see in horror films growing up into this script. So conversations ranged from don’t be bitchy on that line; you care about your friend to larger conversations, like the infamous “homecoming fantasy” scene.

I know what you mean.

That scene was always in question: when are you veering into gay best friend trope and away from the direness of the situation? That conversation was open super early. There were very different versions—very different—versions of that scene. Ultimately, the conversation between Chris, Michael and I landed on Josh cares about his friend and the situation that he’s in, and no amount of comic value in that scene is worth it. So those conversations always skewed in that direction. It was never lost on two queer filmmakers or a queer actor that Josh had to be a human with heart.

That’s great to hear. I want to ask a bit about working as an out-nonbinary performer. What’s the reception been in the business? Are people respectful? Are they combative?

Point number one: we are very lucky to work in a business that, for the most part, skews progressive by nature. That has only served me in coming out. I’ve been getting amazing scripts that have fleshed out queer characters that are complicated and messy. I’ve received nothing but appreciation meeting producers, casting directors, whomever. It makes me feel free to present as my non-binary self, and not “masc for masc Misha,” if you will.

The flip to that, on a larger scale, is that for me, I grew up in an incredibly conservative family of Russian immigrants. Being masculine, straight, male dominating was very big in my family. I carried a lot of that weight on me until this year. I sat down during quarantine and said to myself Misha, you’re not just gay. You’re not just queer. You really don’t like he/him labels. I get goosebumps every time I tell this story. It was a weight off my shoulders to say the words “I’m nonbinary.” I could feel myself get lighter. I danced around my apartment naked. It was a celebration for me, and in that moment, I realized how important it is for people to be able to express their gender however they damn well please.

So me realizing the gravity of how important my non-binary identity is, made me realize how weighty it is for every other person dealing with gender and gender expression. I imagine society will continue to be more aware of folks that are nonbinary. The industry is doing great, and it’s not a trivial thing. It’s such a liberating experience to throw on heels every day and use they/them pronouns and be the person I want to be.

That’s terrific to hear. The flip side of that though: are you ever told that will limit you as a performer, or the kind of roles you’re after?

I’ve been told that ever since I became an actor at 18 years old. I was told I was too short. I was told I wasn’t masculine enough. I was told I needed to beef up. I was told I couldn’t do drama because short, funny-looking people do comedy. I was told everything that I couldn’t have or do. That’s sort of been my narrative: I’m Sisyphus pushing a boulder up a hill. So if anything, I’ve had the best auditions of my life going in for non-binary roles and presenting as I damn well please. I’m grounded. I don’t have to fake mannerisms. I just do me, which is in the middle. The feedback I’ve been getting is that I’ve come into my own. I think I’m just acting honestly.

That’s wonderful. So, for that matter, do you feel limited to playing only male characters? Do you want to be considered for female characters as well? I’ve talked to other non-binary actors who want to audition for both.

I’ll say this: this is evolving on a large scale, and for me personally. I have loved the non-binary roles I’ve been going in for. They speak very much to my truth. I also go in for male presenting or male-identifying roles. As an actor, I spent many years playing those, and I know that world very well. I have not yet gone in for female roles. I think whether you’re talking about presentation, or whether you’re talking about where my soul and identity lies, I don’t know that a female/she/her role is necessary in my near future. But I love that gender and gender fluidity speaks deeply to something I care much about: that the right actor will nail the role. If we can put gender aside and allow actors to audition to the roles they can best nail…

Well and that’s a virtue of the business, right? Since the beginning of drama, men have played women. Women have played men. That’s part of the beauty of it, part of what makes it interesting.

Right. I think so too.

I’ve had some wonderful auditions, and they have picked up in the non-binary realm of things. I’m very excited about the potential there. But honestly, I’ve never been just an actor, and I’m enjoying this leg-up platform to showcase other sides of Misha. So I’m knee-deep in writing and developing a new project of my own. I have a feeling that writer/producer Misha will come to fruition even sooner than I expected.