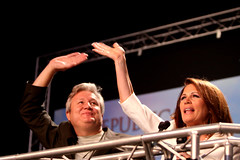 Rep. Michele Bachmann (R.-Alternate Reality) is getting an object lesson in how fickle political success is. In less than two months, she went from winning the Iowa straw poll and being on the cover of Newsweek to looking like something that popped out of a Hello Kitty toaster.

At the GOP presidential debate  Thursday, she had to beg for attention, reminding voters that they “don’t have to settle” for a less ideological pure candidate (alias Rick Perry). She’s currently fifth in the polls and worse still has been relegated by the punditocracy to the second-tier of candidates. The New York Times ridiculed her latest campaign video in a story about how her campaign is running out of money. Apparently, Michele is the candidate that hardcore conservatives were happy to date, but it’s Rick Perry they want to marry.
But before she goes all Pawlenty, let’s give Michele a big shout out. We love the struggling GOP presidential candidate because she recognized our worth right from the start. Bachmann holds the distinction of being the first presidential candidate ever to launch a meteoric career exclusively on our backs. True, there was Pat Robertson and Pat Buchanan, the twin sisters of the religious right, but even the Pats were more equal-opportunity haters. Robertson took on Planned Parenthood, the weather and every religion except his own; Buchanan went after blacks, immigrants, Jews and everyone who didn’t look like him.

Michele, on the other hand, used the lavender menace as her electoral magic wand from the very beginning. “Bachmann built her statewide name on opposing rights for LGBT people,” says Andy Birkey, a reporter for the Minnesota Independent who has done a great job of chronicling Bachmann’s campaign philosophy. (After reading his latest piece on her campaign appointments, you may never sleep again.) In particularly, she seized upon opposition to marriage equality as the way to make her political name. “She won state Senate in 2000 and in 2003 became the major force behind the anti-gay marriage amendment,” Birkey tells Queerty. “And she continued to prop that up as her top issue until she ran for Congress in 2006.”

“That’s her recipe: find the issue, then use it politically to mobilize previously marginalized or disconnected groups,” Lawrence Jacobs, a political scientist at the University of Minnesota told The New York Times. “For those of us who followed her from the beginning, it’s like reading a romance novel with a formula.”

While we never pictured Michele as heroine of a bodice-ripper, we get the point.

Then there’s the family business, which includes pray-away-the-gay therapy.  Michele and her “I just sound gay” hubby Marcus have a two-income household with a single obsession. Not only have the Bachmanns made their careers bashing gay rights, they’ve actually gotten both homophobes and gay people to pay them for it. Brilliant!

We could go on–and on. There’s the campaign aide with the connection to the Uganda kill-a-gay legislation, for example. There are also the comic relief elements: Michele hiding in the bushes at a gay rights rally, Michele screaming for help because she was afraid about being trapped in a restroom by a lesbian, Michele conducting a poll among her family to determine their view of her lesbian stepsister. (Okay, that last one is more sad than funny.)

So let us stop for a minute and salute Michele for recognizing our value. Her presidential campaign is on the rocks, but we’re confident that no matter what happens in the GOP primaries, we’ll have Michele around for sometime to come. After all, as long as we’re around, she’s bound to be as well.