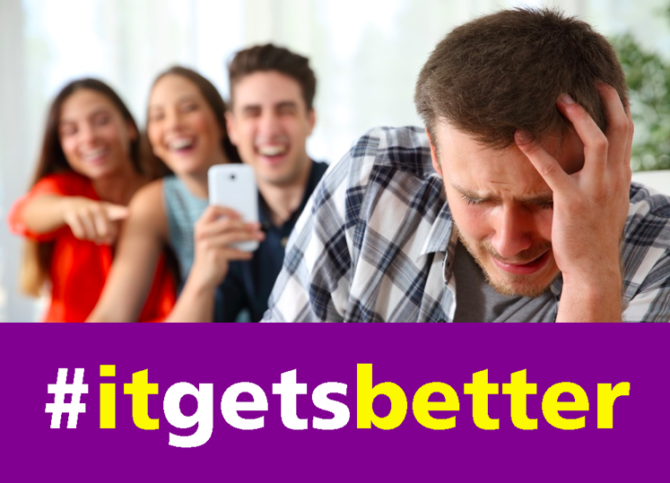 WeŌĆÖre sure Dan Savage and Terry Miller had only the best intentions when they launched the It Gets Better project back in 2010. And they certainly had a lot of support, with everyone from Ellen Degeneres to Hillary Clinton to President Obama jumping on board to promote the anti-bullying catchphrase.┬ĀBut new research finds the project┬Āmight actually be doing more harm than good.

It Gets Better was┬Āoriginally launched in┬Āresponse to the rising number of suicides committed by LGBTQ youth as a result of bullying and discrimination.┬ĀOver the past seven years, it has added more than 50,000 videos of┬Āpeople talking about┬Āhow they overcame bullying, and the book┬ĀŌĆ£It Gets Better: Coming Out, Overcoming Bullying, and Creating a Life Worth LivingŌĆØ has hit multiple bestseller lists.

But┬Āa┬Āstudy from the┬ĀUniversity of Arizona suggests simply┬Āwishing for┬Āa brighter future where people are nicer and homophobia no longer exists may not actually be an effective┬Ātool for young people who are struggling.

ŌĆ£Our findings question the ŌĆÖIt Gets BetterŌĆÖ narrative thatŌĆÖs been given to LGB youth,ŌĆØ Russell Toomey, who led the study, says. ŌĆ£Asking youth to accept negative experiences as the only coping strategy potentially exacerbates stress.ŌĆØ

Exacerbated stress, of course, could potentially lead to even deeper depression and, god forbid, suicide.

Moreover, Toomey explains, alternative-seeking strategies (changing schools or social circles) often result in poorer adjustment, higher incidents of depression and lower self-esteem as it essentially labels the victim as the problem rather than addressing the deeper issue.

ŌĆ£Alternative-seeking strategies involve finding new spaces to thrive in, rather than coping with the space that youŌĆÖre in,ŌĆØ he says. ŌĆ£Our results find that thatŌĆÖs associated with more depressive symptoms, less self-esteem and less satisfaction in life.ŌĆØ

Researches found that the most effective┬Ātool for helping LGB youth cope with bullying was the┬ĀŌĆ£LGB-specificŌĆØ one (joining a gay-straight alliance).┬ĀYoung people who sought these┬Āsorts of groups reported better psychosocial adjustment and were more likely to graduate high school.

ŌĆ£Everybody needs support,ŌĆØ Toomey concludes, ŌĆ£and itŌĆÖs really important, particularly in adolescence, to find other people who are like you, since you are going through, developmentally, a stage where you may frequently think that youŌĆÖre the only one thatŌĆÖs experiencing whatever youŌĆÖre experiencing.ŌĆØ

He adds, ŌĆ£Having a support group where other people look like you and experience the same thing as you is really important for health, well-being, development and sense of identity.ŌĆØ

Amethyst on her haters, her Season 15 castmates, and the ‘Drag Race’ judges: “IŌĆÖm trying to think without being mean”