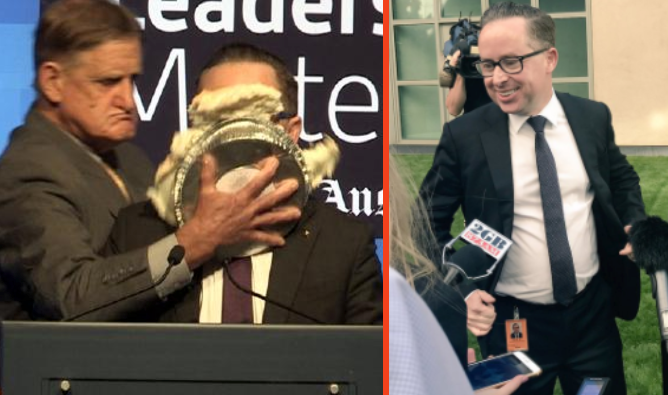 Three minutes was all it took.

Out Qantas CEO Alan Joyce had just begun speaking at a business breakfast in Perth, Australia, when things came to a creamy halt. An elderly man who said he opposed Qantas’ campaign in favor of same-sex marriage delivered the blow, though what he was hoping to actually achieve besides a brief moment of confusion is anyone’s guess.

In the moments immediately following the strike, Joyce admirably laughed the whole thing off. “I don’t know what that was about,” he told the audience. “Now, if there are any more pies can you get it over with now.”

Well now he most certainly does know what it was about, and he’s using it as an opportunity to stand up even stronger for what he knows is right.

“I have every intention to continue to be vocal on those social and community issues,” he told reporters after the event.

“I am a big believer in the great Australian expression of ‘fair go’. It is all about giving people equality,” he continued.

“Qantas has always been vocal on gender issues, on LGBTI issues, on Indigenous issues.

“No attempt at bullying or suppressing our voice will work.”

The Australian federal budget has just recently allocated $170 million for a national vote (plebiscite) on marriage equality, which advocates argue is unnecessary to enact change, and would only serve to reignite an ugly debate.

“It is very clear to me is that a plebiscite would bring out the worst behaviors and would encourage the type of situation we saw yesterday where people’s views aren’t respected,” Joyce said.

As far as the pie handler goes, Joyce says he will be pressing charges despite being offered an apology.

“Certainly what happened yesterday has reinvigorated me in actual fact.

Now stick that in your oven and bake it.