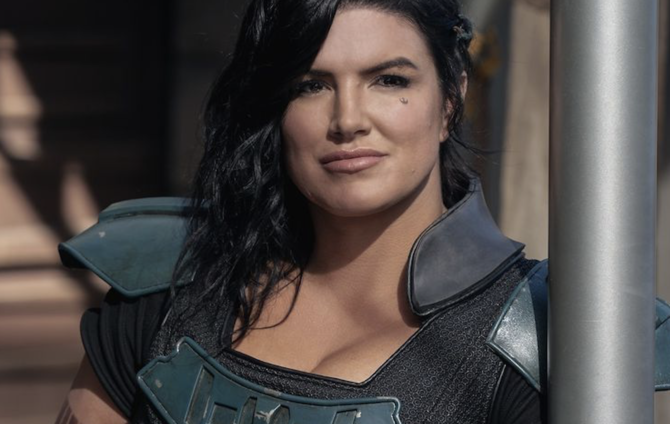 Gina Carano, the former The Mandalorian star fired after a series of offensive tweets, is making a “comeback” in the new Western Terror On The Prairie…. so says Ben Shapiro’s media company The Daily Wire, which happens to be producing the movie.

Wait, a comeback? What is she returning to, exactly? More flat, uninteresting screen roles that define acting as “lifelessly glowering on camera”? Well, if the tepid trailer for Terror On The Prairie is any indication, that’s precisely what Carano is doing. You can see for yourself below, although it’s hardly worth the engagement:

Disney canceled her.
Hollywood left her for dead.
Now, the uncanceling of @ginacarano begins!

Use code "TERROR" for 25% off memberships so you don't miss out on the premiere of #TerrorOnThePrairie at 8:30pm ET!

The film comes from director Michael Polish, and it tells the story of Hattie (Carano), a frontier woman who’s forced to defend her home and her family against a band of vengeance-seeking outlaws. Sounds straightforward enough—some might even call it boring—but you better believe Shapiro and The Daily Wire are talking it up like it’s the motion picture event of the summer. (It’s not.)

On the webpage for Terror On The Prairie, the right-wing media-outlet-turned-fledging-movie-studio touts, “Gina Carano is back. Disney canceled her. Now, the un-canceling begins.” She went from Star Wars, one of the biggest franchises in the galaxy, to a generic oater that’s only viewable to paid subscribers of a conservative streaming platform—that’s not a comeback, that’s a bellyflop right into the Sarlaac pit.

This is Carano’s first project since she was fired from The Mandalorian by Disney and LucasFilm in early 2021 for countless “abhorrent” social media posts in which she mocked transgender people, Jews, and spread a number of QAnon theories about COVID-19, mask mandates, and voter fraud in the 2020 election. Infamously, she also took to Instagram stories, where she shared a post that appeared to compare being a Republican to living through the Holocaust.

did she just compare the holocaust to being a republican .. #FireGinaCarano pic.twitter.com/an3css7Kdr

The posts sparked a public outrage, prompting the #FireGinaCarano hashtag to trend, and Lucasfilm issued an official statement shortly thereafter, reading, “Gina Carano is not currently employed by Lucasfilm and there are no plans for her to be in the future,” effectively squashing rumors that her character, galactic ranger Cara Dunne, would topline a Disney* spin[off series of her own. “Nevertheless, her social media posts denigrating people based on their cultural and religious identities are abhorrent and unacceptable.”

After also being dropped by her agency, UTA, Carano announced that she’d be partnering with The Daily Wire for her next project, which would eventually become Terror On The Prairie. Conservative press around the film proudly boasts it was filmed on-location in Montana, far away from “Hollywood,” where actors were not beholden to COVID-19 safety regulations, free to phone in uninspired performances without regular COVID testing or on-set mask mandates.

Unsurprisingly, Carano’s co-stars are a number of forgotten actors who’ve only made headlines of late when they’ve decided to to spout far-right-wing talking points or pop off about the supposed loss of American values. There’s former Justified star Nick Searcy, who warns that leftists “have ruined the greatest country that has ever existed on the face of the earth.” The OC‘s Samaire Armstrong shows up, too, an actor who’s repeatedly shared her pro-Trump, anti-Black Lives Matter views while, ironically, decrying the end of free speech. Honestly, the whole cast is pretty bleak.

Gina Carano’s Terror On The Prairie is streaming now and, if you’re lucky, this is the last you’ll ever hear about it.